French Onion Soup is easy to make from scratch at home with just following a few basic rules.

Everything you need to know about onions, broth, bread, cheese, and cooking vessels to make the perfect, steaming bowl of French onion soup at home. 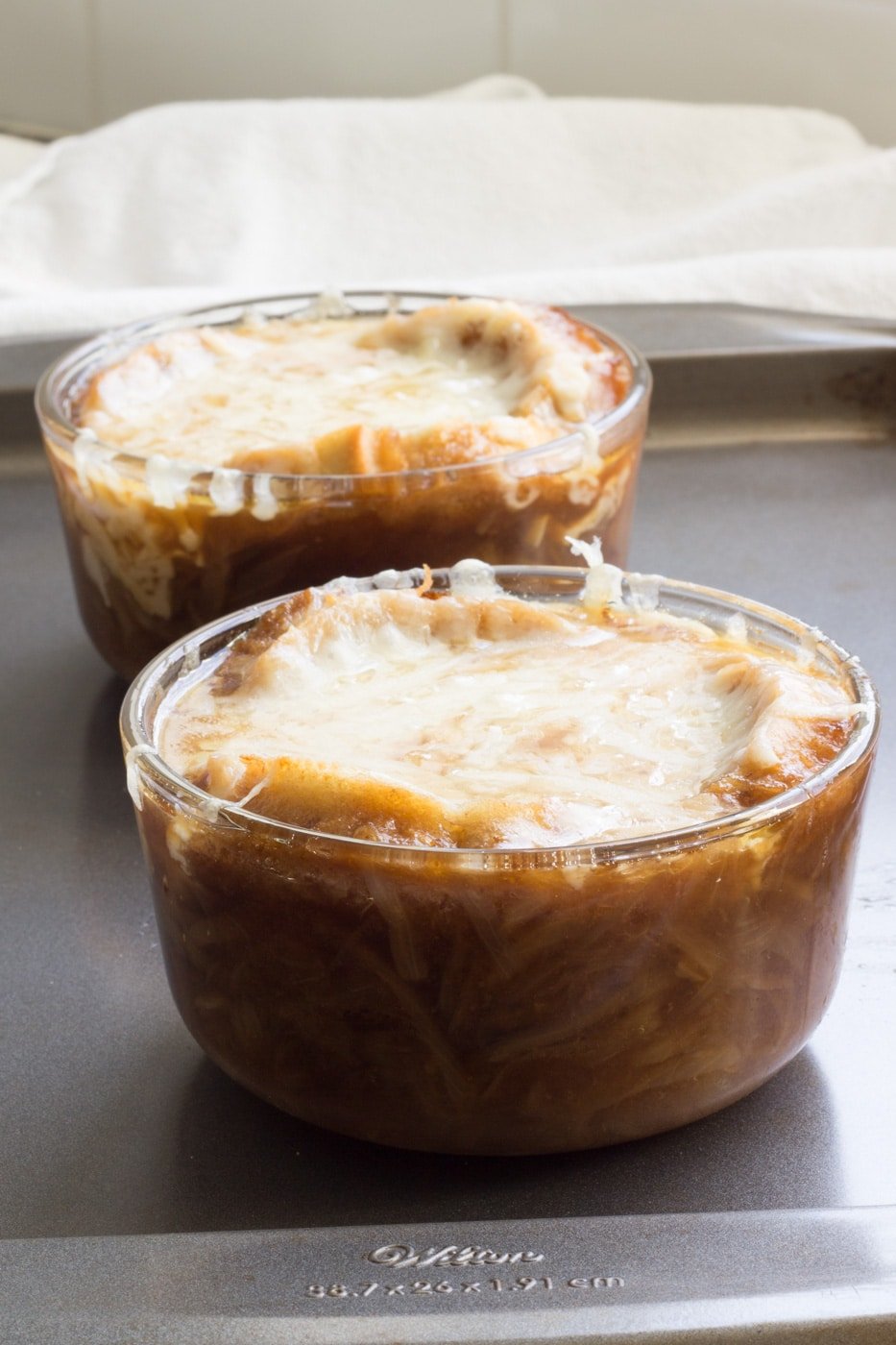 How to Make French Onion Soup

Here is everything you need to know about onions, broth base, bread, cheese, and cooking vessels to make the perfect bowl of French onion soup at home. 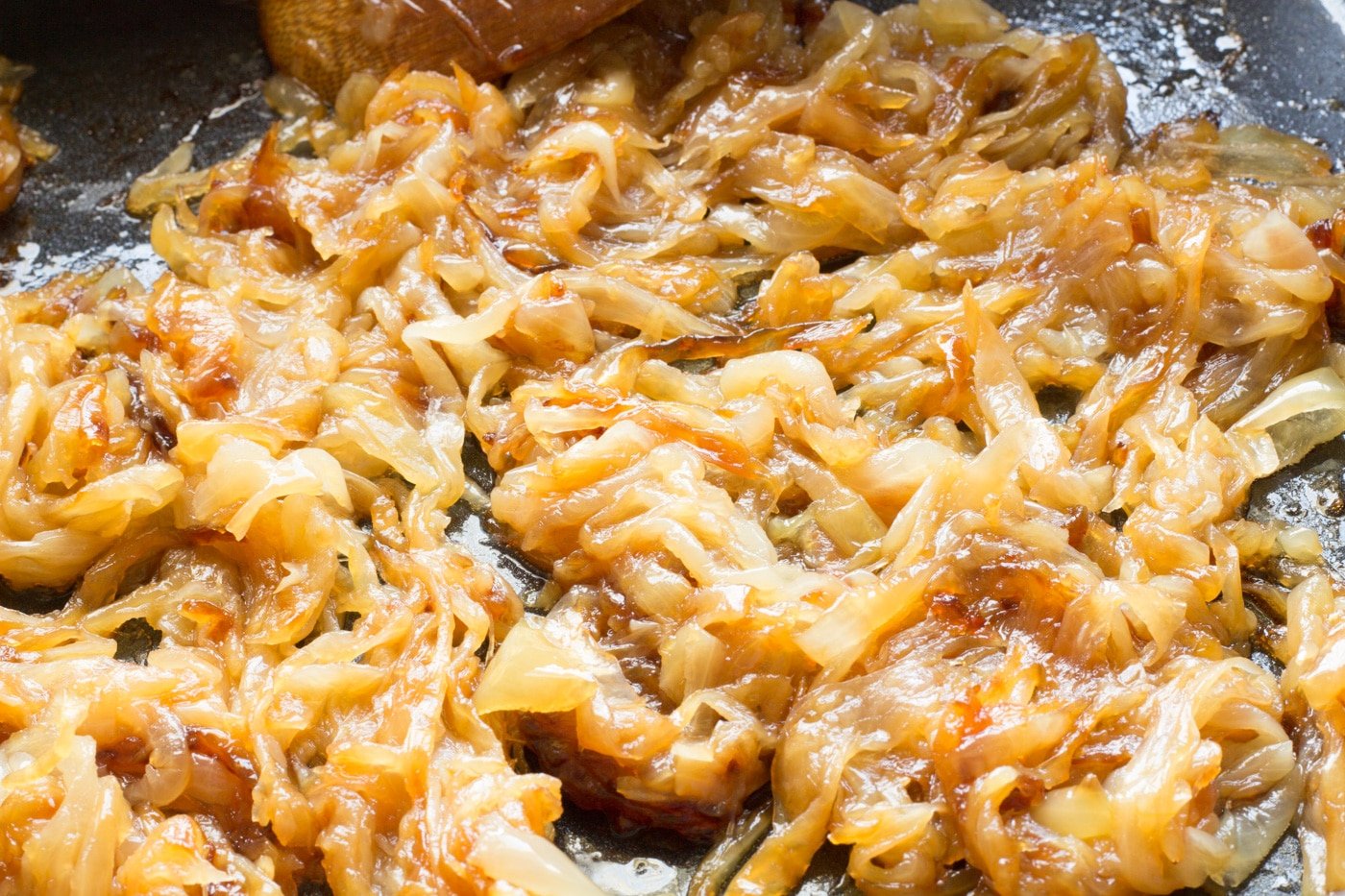 A true French Onion Soup does not use onions that have simply been sweated in some butter.  I would call that some kind of cheater soup.  Will it work? Sure, but so would a can of condensed soup.

To get the best flavor out of French onion soup use caramelized onions.  It will truly be the best time investment you can make with this recipe. 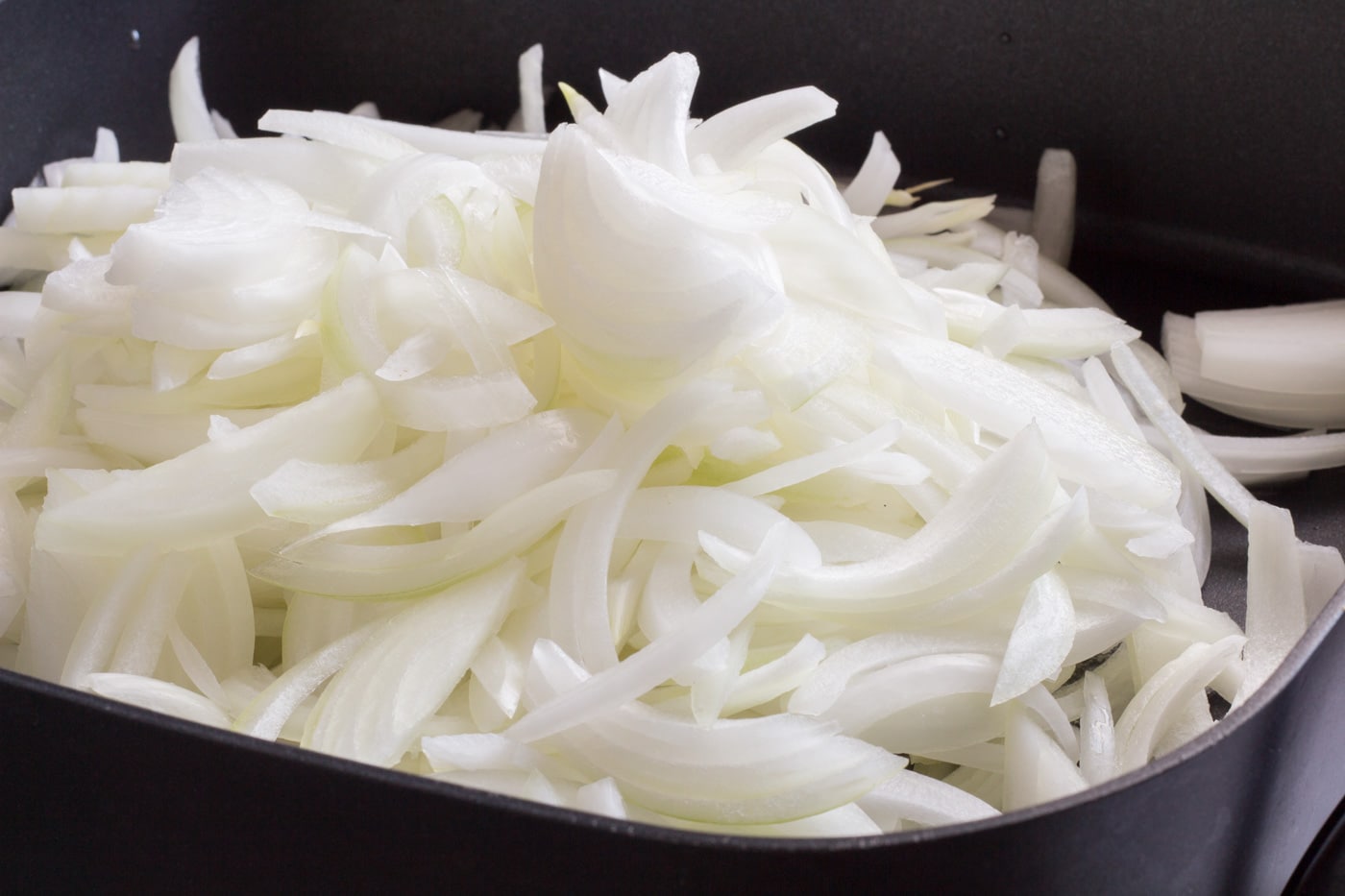 Yellow Onions are the most basic cooking onion.  There was a time when yellow onions were your only affordable choice in a supermarket.  Yellow onions are perfect for caramelizing onion because they are fairly inexpensive and readily available.

White onions are readily available in stores.  They tend to have a bit more of a bite when eating them raw.  They will mellow out with cooking and will be fine used in this soup.  I use white onions and yellow onions interchangeable when cooking.  I generally buy whichever onions look the best in the bin. 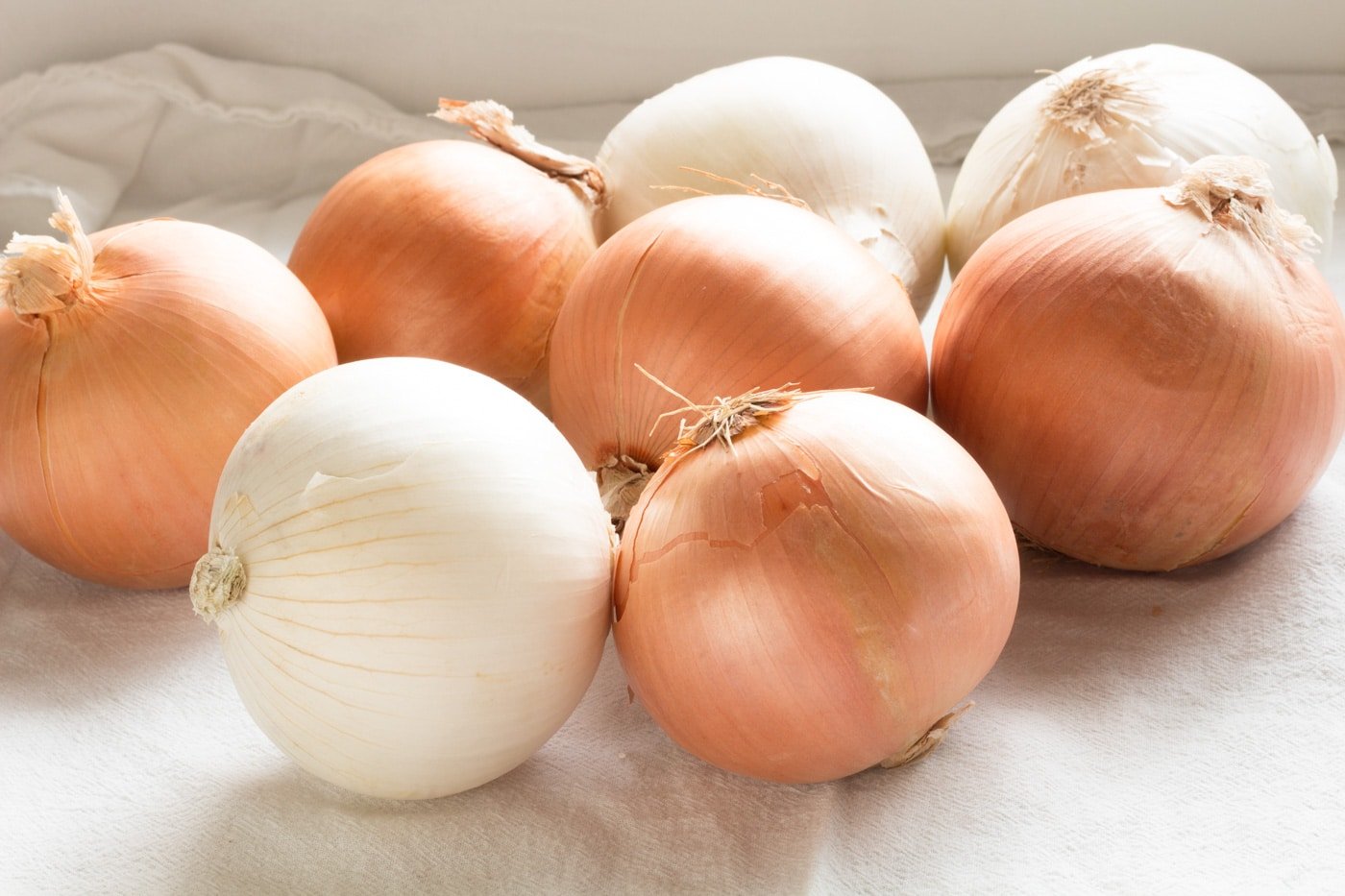 While red onions can be used for French onion soup, they will turn the broth a weird color.   I usually reserve red onions for salads and sandwiches.

Sweet onions are the sweetest option when eaten raw.  They also tend to be the most expensive out of all the onions.

Sugar content varies in sweet onions so I find it best to use them in a recipe that calls for raw onions, like macaroni salad.  Using sweet onions in French onion soup may or may not affect the sweetness level of the finished product.

Wouldn’t it be disappointing to spend hours making French Onion soup only to find out the onions were too sweet?  This is why I just don’t do it.

Do I have to use Beef Broth in French Onion Soup? 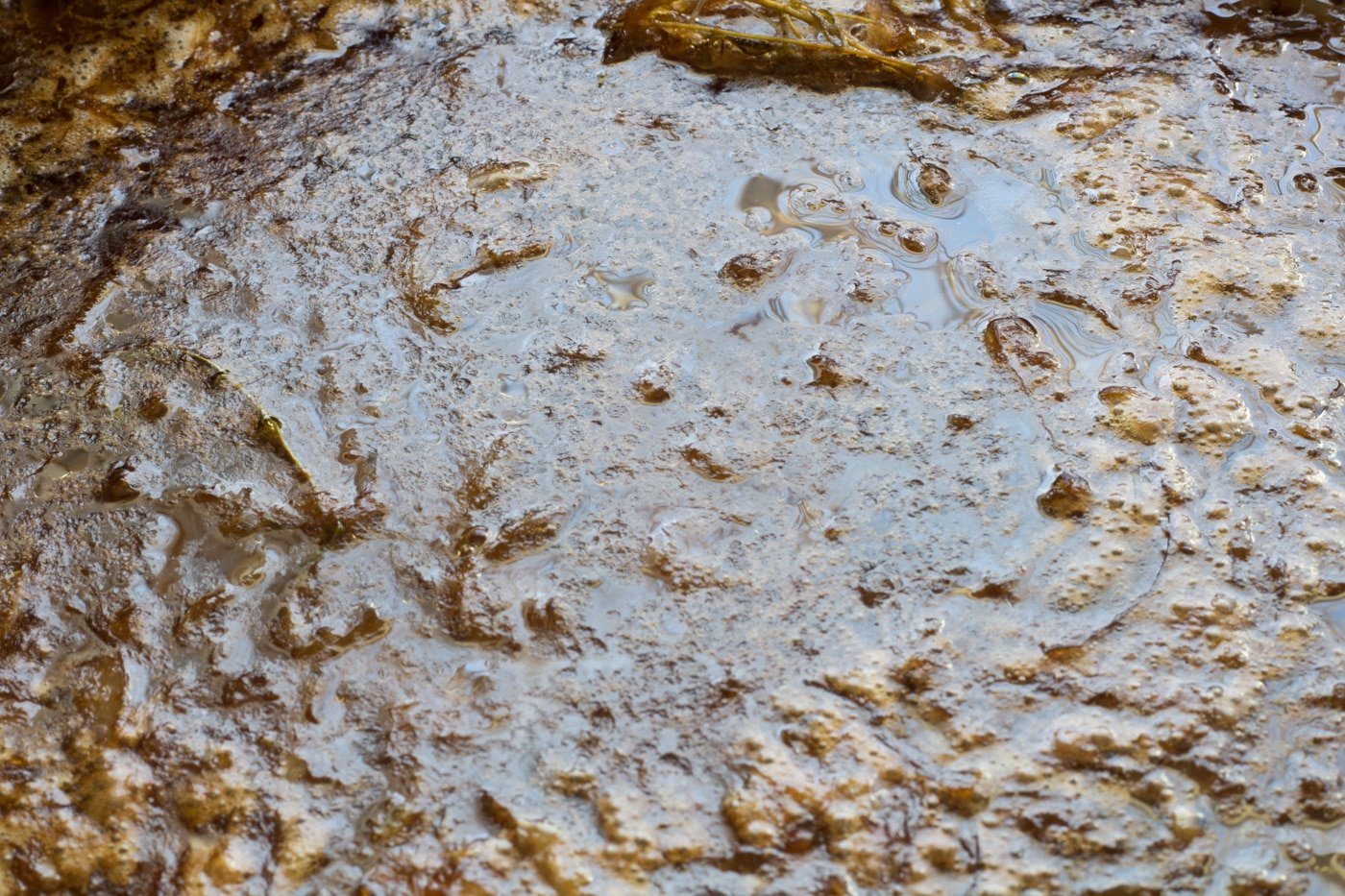 Homemade beef stock, chicken broth, and even vegetable broth can be successfully used in this recipe.

Use a combination of broths.  That’s what I do in my wonton soup!

I start with canned broth just because that is what I normally have on hand.

For the best results, use apple cider.  NOT apple cider vinegar.  3/4 of a cup of vinegar will produce a very tart soup.

A sturdy French baguette works the best for me. 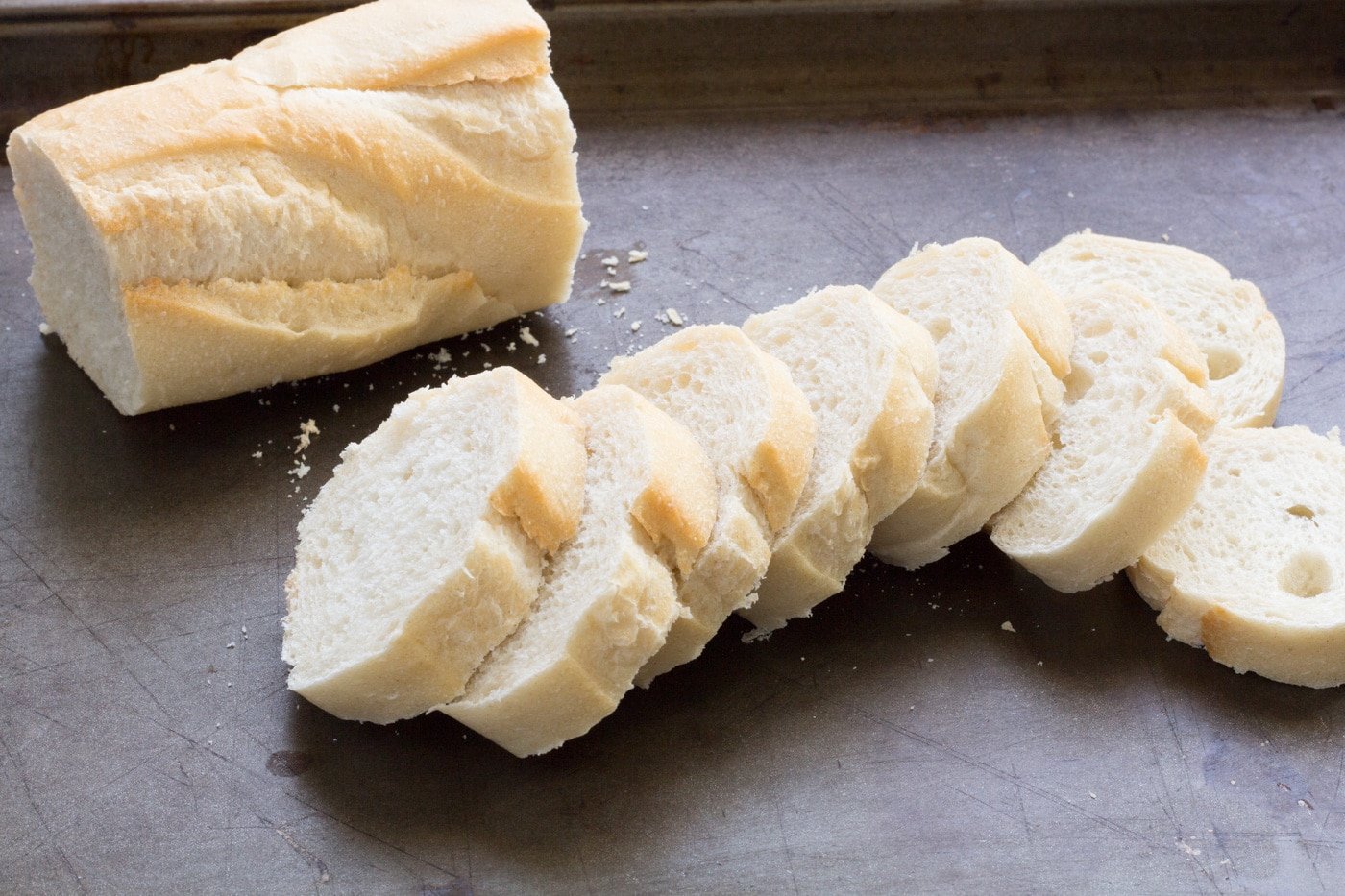 There are 2 ways you can use a baguette in this recipe.

Slice the bread into 1/2-inch to 1-inch thick slices.   Toast one side of the bread under a broiler until just past golden brown but not burnt. 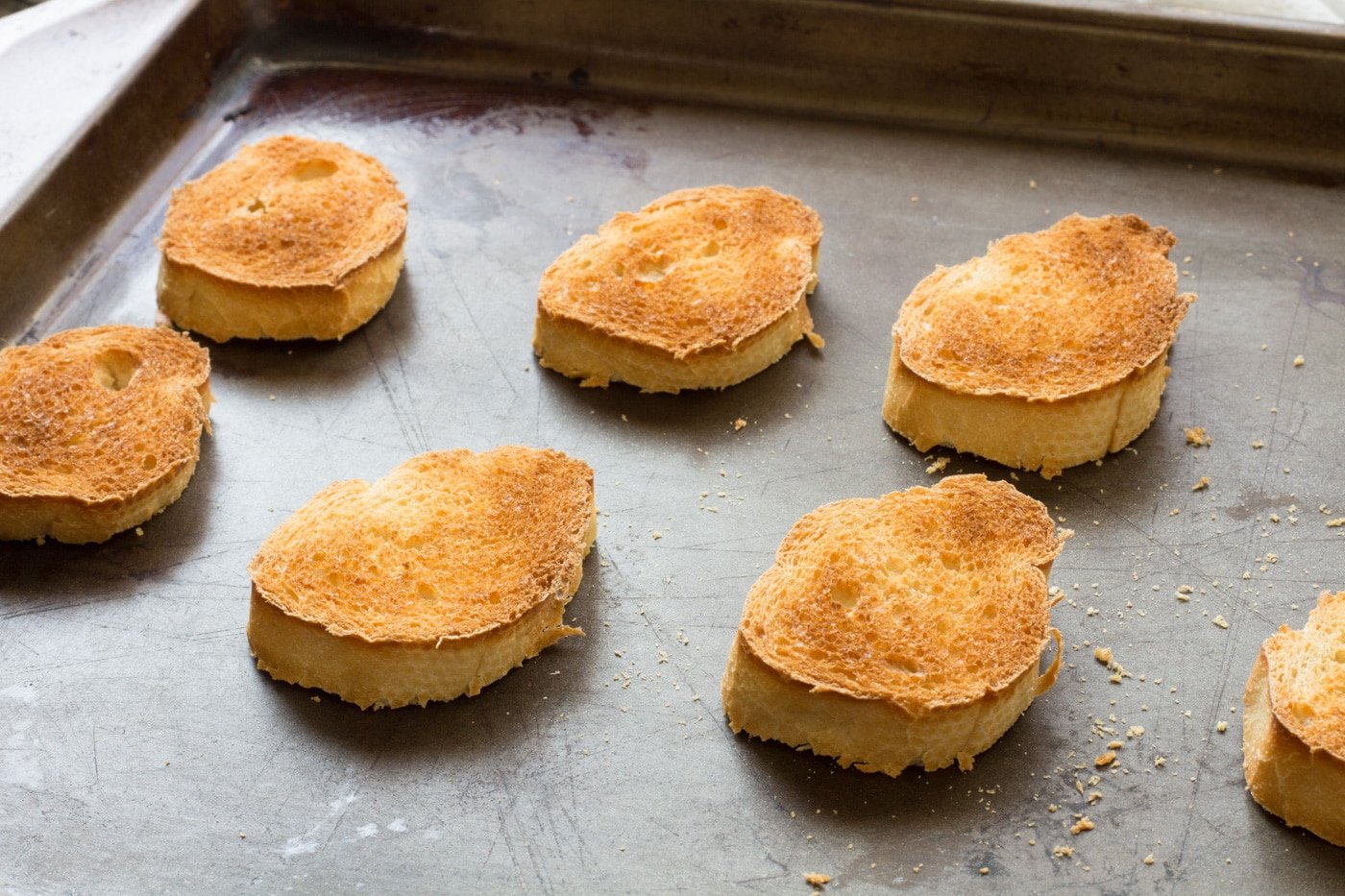 Depending on the size of the bowl I add 2 to 3 pieces of bread to the bowls. 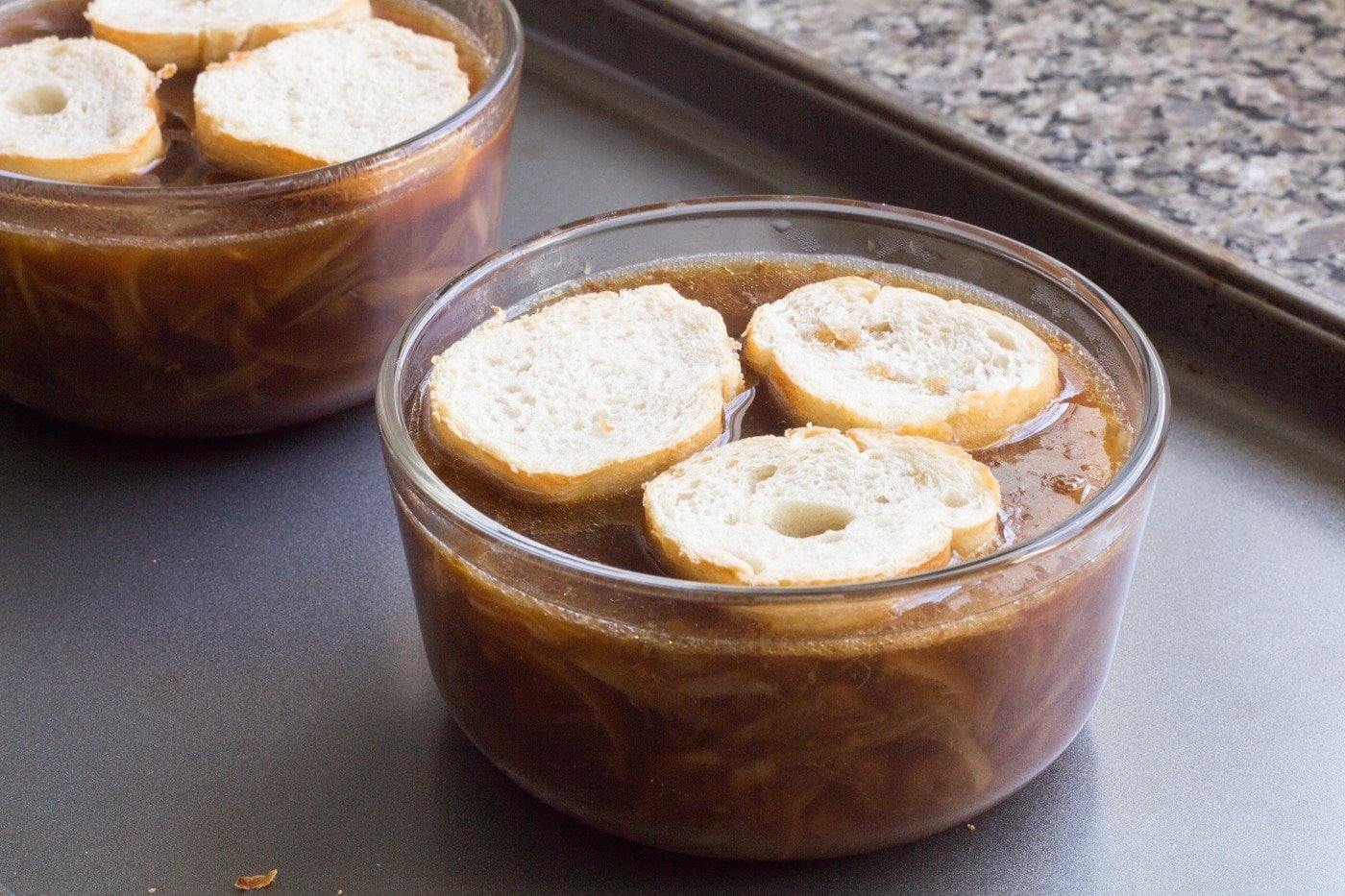 I put the toasted side down when making this soup.  It keeps the bread from getting too soggy too soon.  I leave one side untoasted so that it isn’t hard if the broth doesn’t get a chance to saturate the bread completely.

Alternatively, you can cut the baguettes into 1-inch cubes and bake in a 400 degree F oven, stirring every 3 to 4 minutes until toasted and add them to the bowls of soup.

I prefer the sliced bread method.  It takes less effort.

Not surprising, a French Cheese, Gruyere, is the traditional choice for French Onion soup.

I love using it in my soup, but I find I get better results when I use half shredded Gruyere and half shredded mozzarella cheese.

If you want cheese that is hanging over the edges of the bowl, you are going to need some kind of sliced cheese.

Mozzarella, Swiss or a combination of the two would be my choice for draping over the sides of a bowl.

An electric skillet is the best way I have found to make French onion soup. 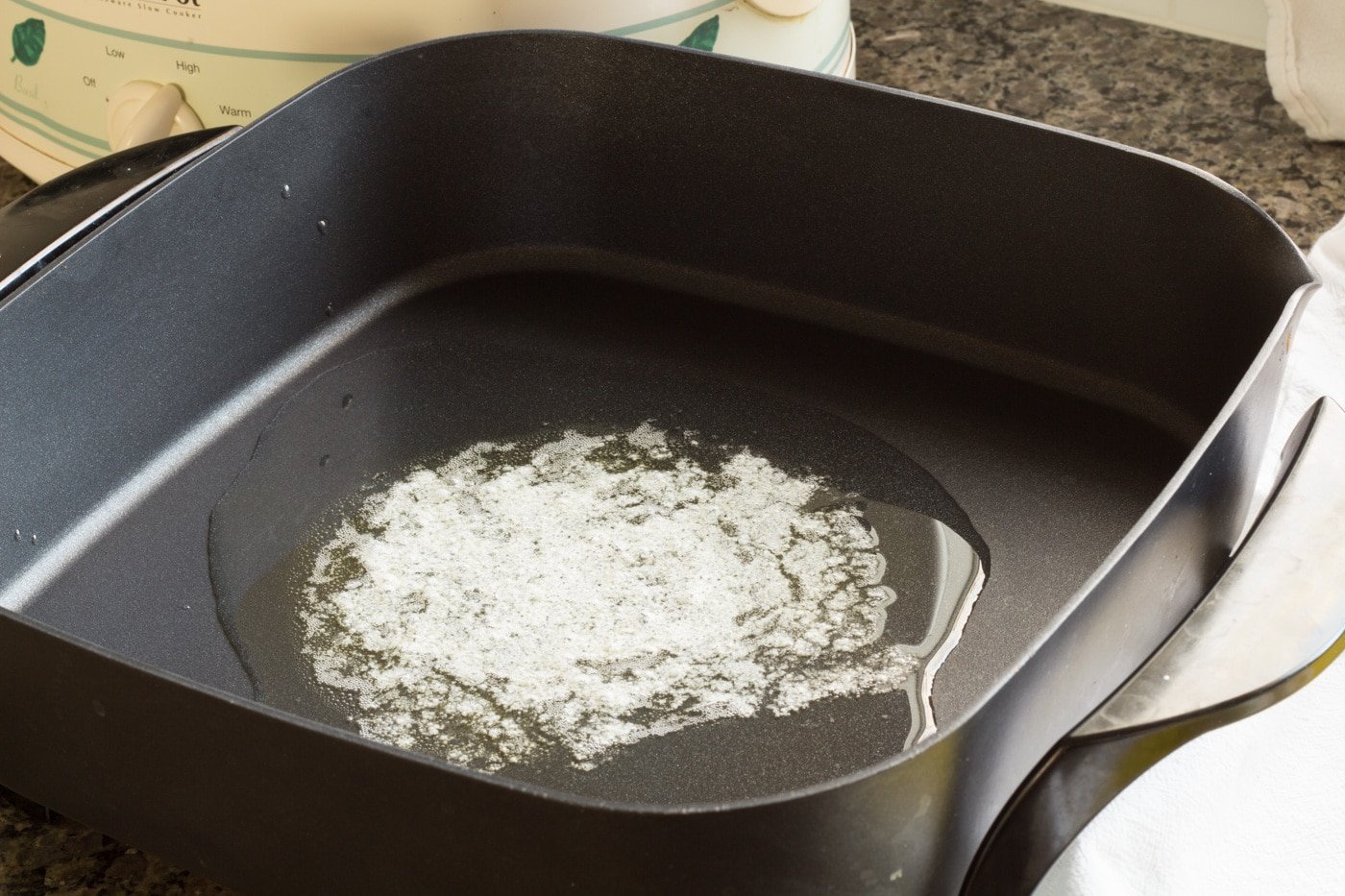 I can keep an even heat, keep the soup warm while I prep everything else, and most importantly I keep the top of the stove clear so I have a place to put the bowls of soup after removing them from the oven!

It’s one of those things I learned from cooking shows.  Back in the day when they actually cooked……….

Can I Make French Onion Soup Without Soup Crocks

Yes, you can and we have photos to show it is possible! 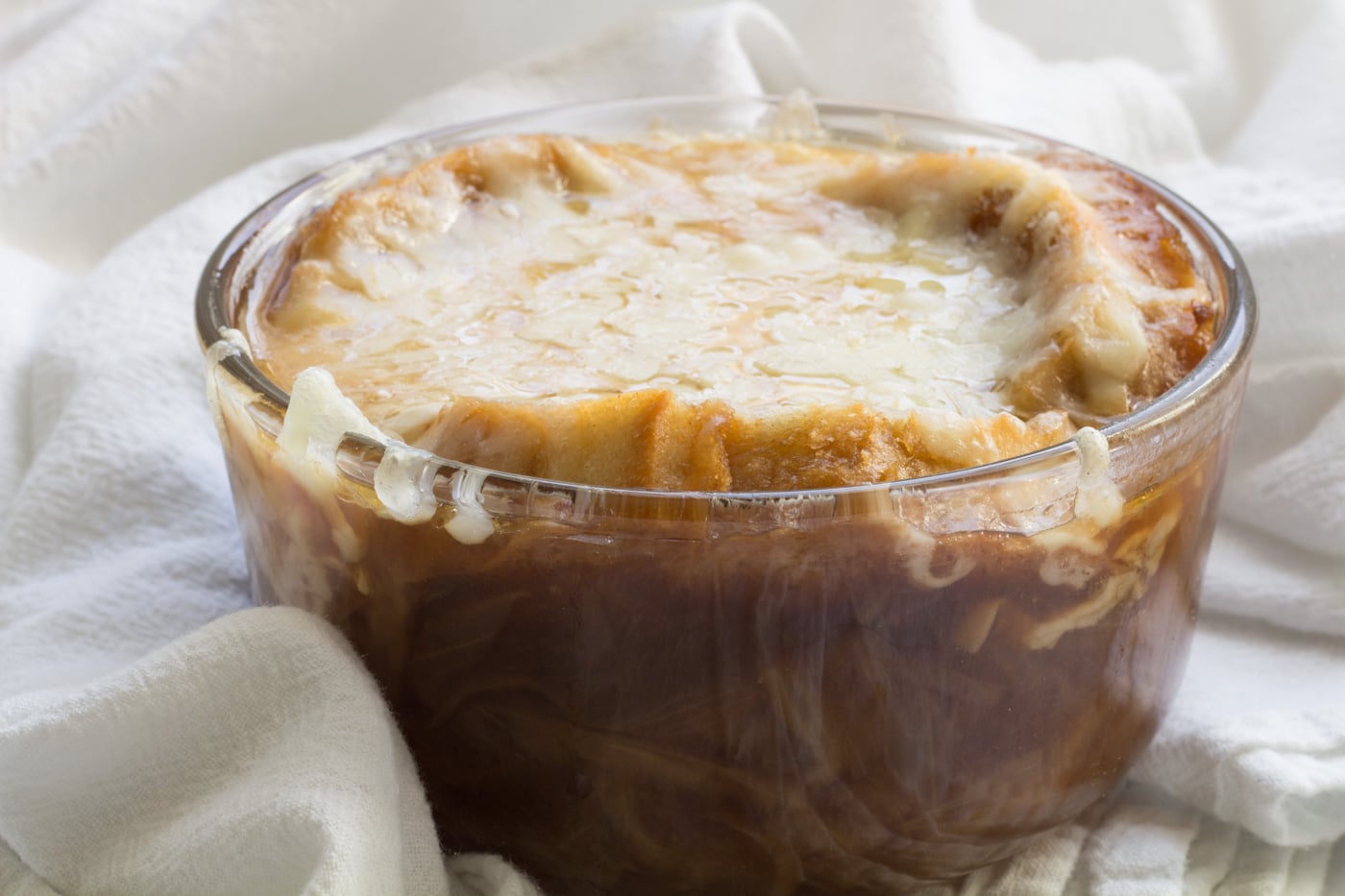 Unless you are going to make French onion soup once a month I wouldn’t spend the money nor the storage space for some bowls you might use occasionally.  I use Pyrex oven safe bowls.

I haven’t had any bowls break yet, but you still need to use your best judgment. 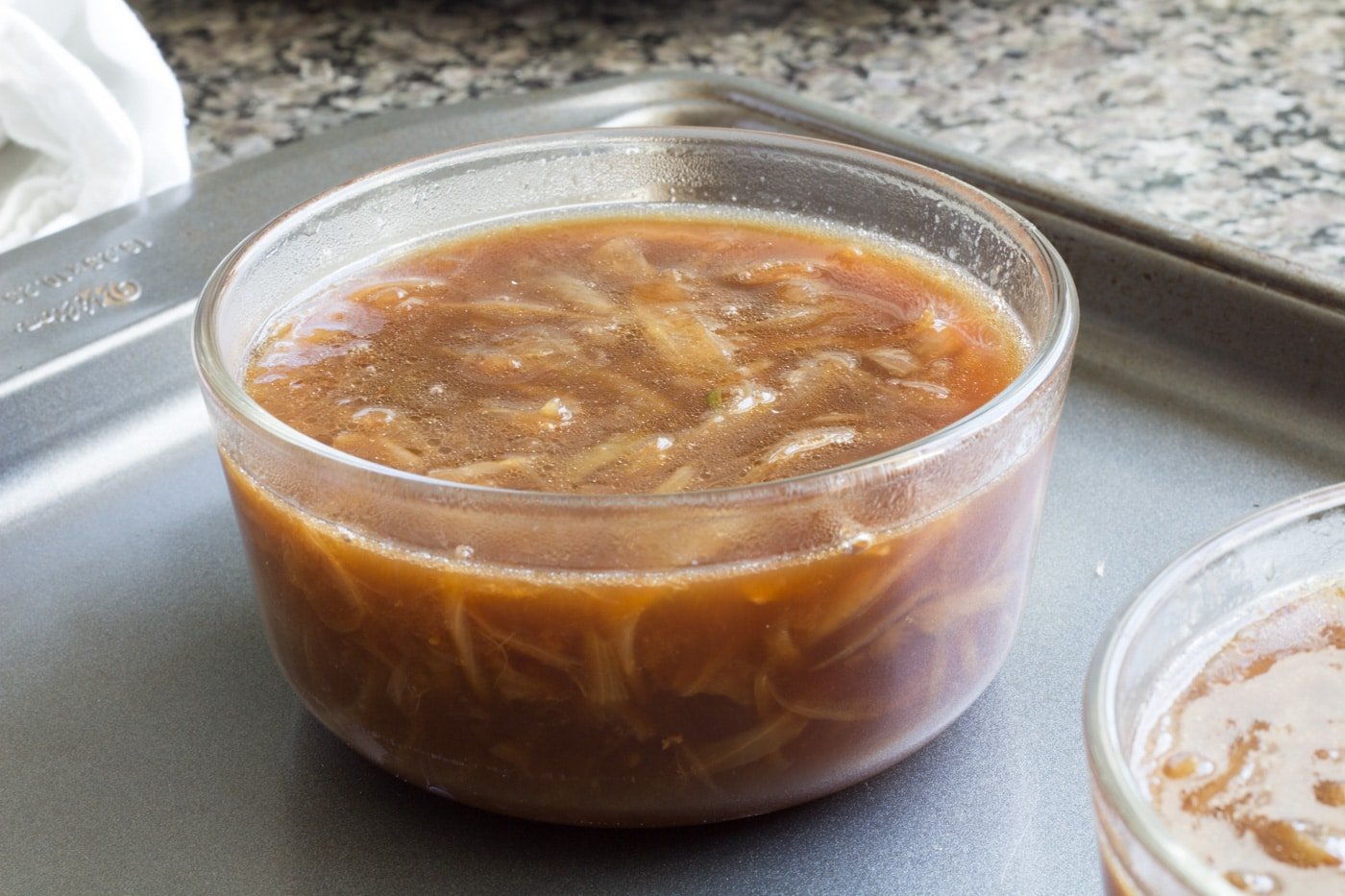 Do place the bowls of soup onto a baking sheet or tucked inside of a cake pan.  It will catch any overflow that may happen and if a bowl does break it won’t be all over the floor of the oven.

If you want to make a vegan French Onion Soup base you can even use vegetable stock.  A good bit of the flavor will come from the caramelized onions anyway.

To keep French onion soup vegan, be sure to use all olive oil or replace the butter called for in this recipe with a vegan alternative.  I have seen vegan mozzarella cheese and that could be used.

Most breads are vegan by nature, read the ingredients though before choosing a bread to feed to your vegan friends.

Swanson is said to be gluten-free and the ingredients do not list wheat gluten as an additive.

Skip the flour when making this soup gluten free.

In order to add a bit more body mix about a teaspoon was cornstarch with ¼ cup of water and add to the hot soup.  Bring it to a boil to get the full thickening power of the cornstarch.  If you want a thicker soup, use another teaspoon of cornstarch.

Gluten Free Bread – everyone has their own favorite version of gluten-free bread. There are a few options at Whole Foods and Sprouts for French rolls and baguettes.

Make sure that gluten-free options are well toasted and wait until the very last minute to add to the soup and top with cheese.  Don’t let this version sit for long.

It is also possible to toast the gluten-free bread then top with cheese and pop it back in the oven.  Set this cheesy “crouton” on top of the hot onion soup in the bowl. 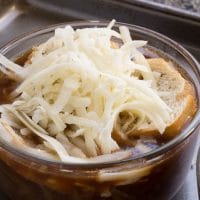