Chili-Mac has been a part of my life as long as I can remember.

Growing up, Wally’s Drive-In was the best place in the world for a hamburger, onion rings, or a chili-mac. I suppose they had other things on the menu, but I wouldn’t know. I never ordered anything besides those 3 things.

Wally’s had been a staple in my hometown and it was a sad day when the last carhop delivery was made and the doors were locked permanently.

It would be a long time before a genuine chili-mac made an appearance in my life.

Oh, I’d seen chili-macs on menus and saw recipes for chili-mac, but let’s face it, those were never anything more than chili, with or without beans, glopped on top of spaghetti noodles.

If you are from the Midwest you know that a real chili-mac doesn’t even involve real chili.

None will ever be as good as Jaenick’s Root Beer Stand Red Hots and Sauce Buns.

Those are not your everyday chili dogs and bear no resemblance to coney dogs at every “coney island” type restaurants that have popped up over the years.

But that discussion is left for another day, another post.

I encountered my first Steak ‘N Shake a few years after Wally’s closed.

It was almost identical to Wally’s. They even had a drive-through.

Then we moved…….again. No Steak ‘N Shake in sight or even within an hour’s drive.

So, what’s a girl to do? Make your own recipe.

The original Wally’s recipe called for kidney suet – um, no thank you!

If you are set on having the grease ring at the bottom of the plate that is common when eating Steak ‘n Shake chili-mac, just use a high-fat ratio ground beef like 73/27 and don’t drain off the fat.

I have never eaten Cincinnati chili or skyline chili, but I suspect Chili Mac might be closer to those than a chili that you eat from a bowl with a spoon.

At least in its consistency.  I’m not sure about the addition of all those extra spices and chocolate though.

Chili-Mac is about as easy as a meal gets.

The recipe does not call for browning the meat.

That is not a mistake on my part.

This recipe continues to simmer long enough that the hamburger is cooked.

You could also boil the hamburger for the same smaller pieces, but that just creates extra work in my opinion.

That is the secret to getting the proper consistency for my version of chili-mac.

SIGN UP FOR NOTIFICATION AND NEVER MISS AN UPDATE 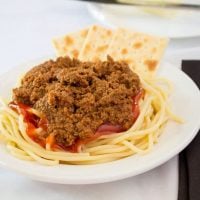 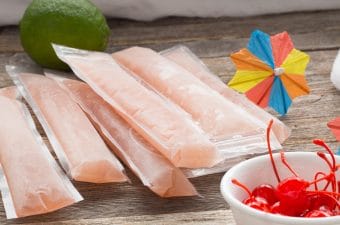