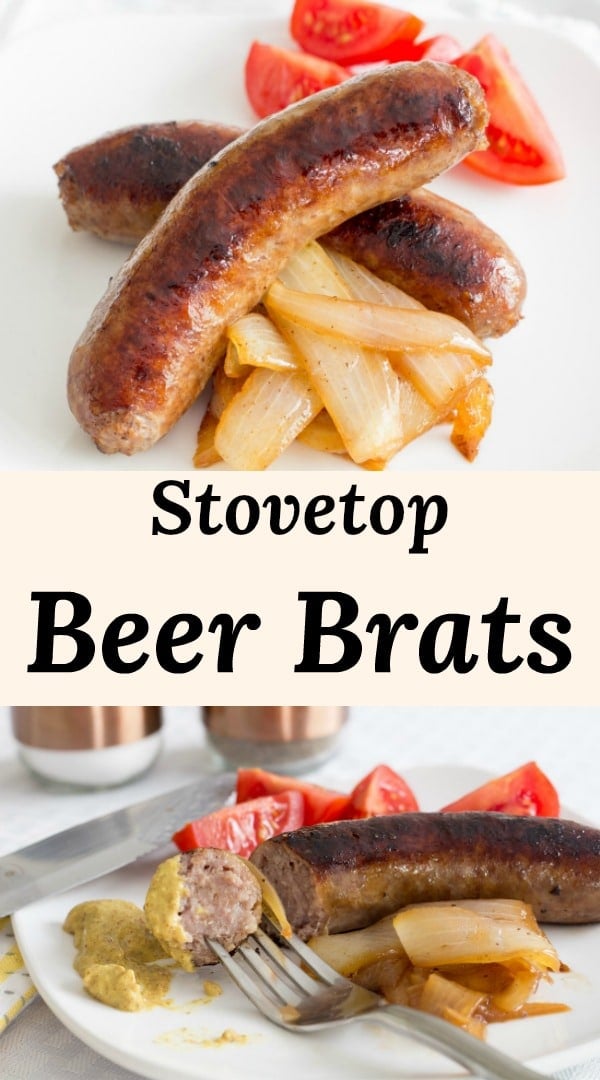 Want beer brats for dinner but the weather has you stuck indoors?  No problem! Cook bratwurst on the stove! Instead of simmering your brats in beer and then finishing on the grill, just make them in one pan.

I love making this recipe. Since the brats are browned in a skillet and then simmered with onions in beer, it’s quicker than waiting for hot coals! There are also times when it is storming or super cold outside and all you want is a bratwurst!

Any plain raw ones can be used, including cheddar brats.  When using cheddar brats, don’t let the brats cook so long that they start to split open.  All the cheese will ooze out.

I probably wouldn’t use the ones labeled as having beer in them.  With no idea of which kind of beer they used, there is likely to be a flavor profile conflict.

Don’t use the smoked or stadium one either. They have been cooked.

I buy my brats at mega marts but fancier ones from a German butcher would work just as well.  You can even try to make your own!  Our German Potato Salad post has some great tips on

Yellow and white onions are both great in this recipe.  I don’t find much of a difference between the two here.

It’s best to leave the onions in large pieces so that they have a little bit of body left at the end of the cooking time.

To get the most flavor out of the onions, drop them in during the last part of browning the bratwurst.  Push them to the bottom of the skillet and let them get a bit of color on them before adding the beer.

There is beer in this recipe, but I feel like it is still kid-friendly.  The recipe cooks long enough that the vast majority, if not all, of the alcohol, will be burned off.

I use a standard light lager, like Budweiser, Corona, or Miller.  If we are doing some entertaining, I will use whatever brand we have.  If I am simply buying beer for this recipe I go with whatever is on sale or cheap, Natural Light, PBR… you get the idea.

I find this style of beer leaves behind a sweet syrup after the onions have cooked down.

You can use any kind of beer really, and the darker beers will leave more of a distinct beer flavor.  I probably wouldn’t waste any of my good craft or micro-brewed beer on this recipe.

Avoid using any sour beers, I just don’t think the flavor would be spectacular.

Want it to be totally alcohol-free?  Try using some beef or chicken broth.

This recipe uses beer, but you can still make them on the stove without it.  Simply replace the beer with water or a flavored broth, like beef or chicken.  I would also add a 1/2 teaspoon of sugar or brown sugar to replace the sweetness beer leaves when reduced.

If you don’t want to use it because you are afraid of alcohol, a good portion of it should evaporate long before this dish has finished cooking.

Adding a small amount of oil to a hot skillet before adding the brats will help them brown faster without overcooking.

Flip them occasionally until at least two sides are completely browned.  I like mine best as a dark brown because they will lose some color when they are simmered.

This dark coloring will also add some extra flavor to the onions. 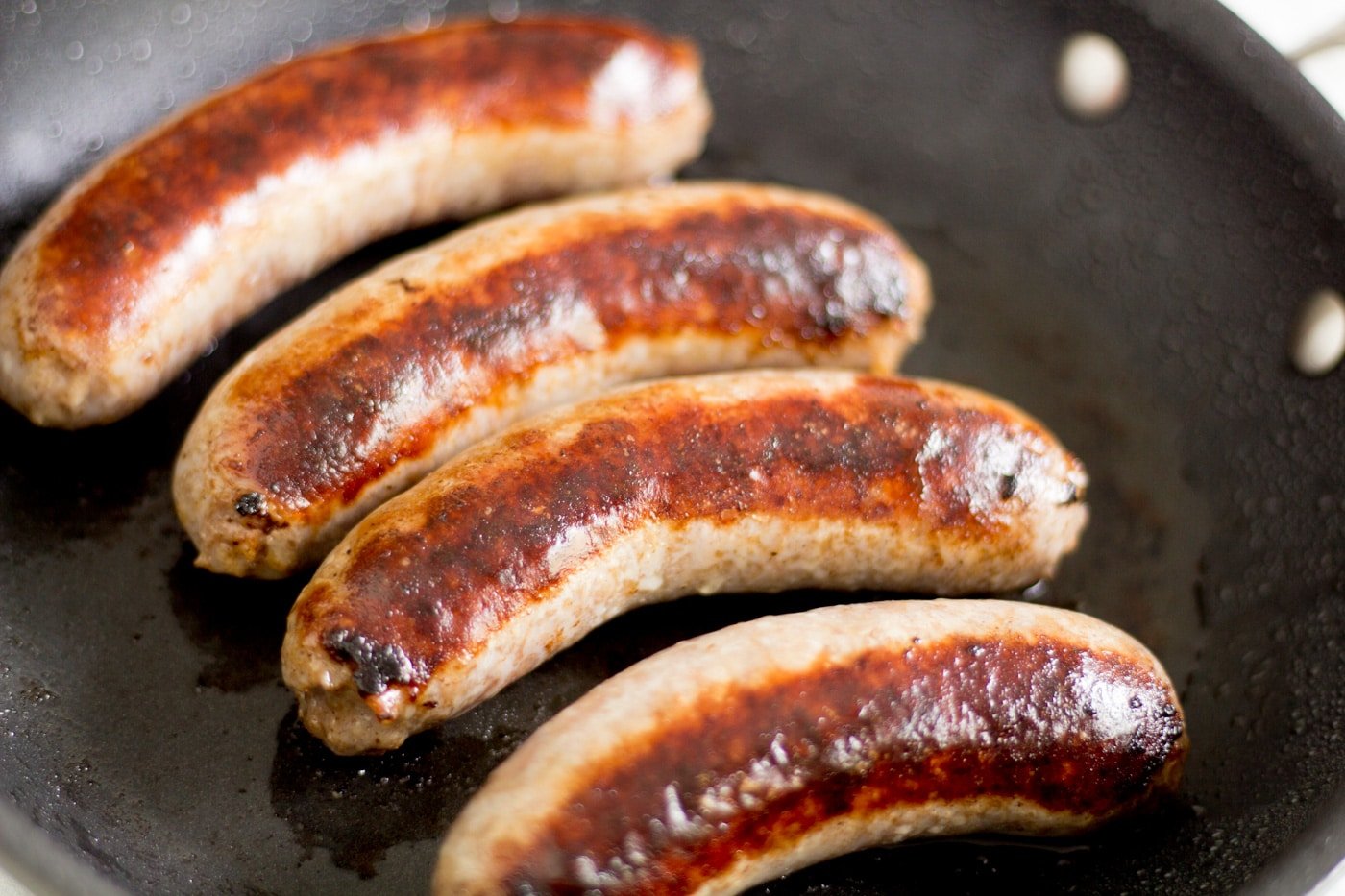 Add the onions and allow them to wilt and brown a bit, then add the beer and reduce the heat to simmering.

You won’t need a lid, allowing the steam to evaporate is how you get a nice thick sauce. 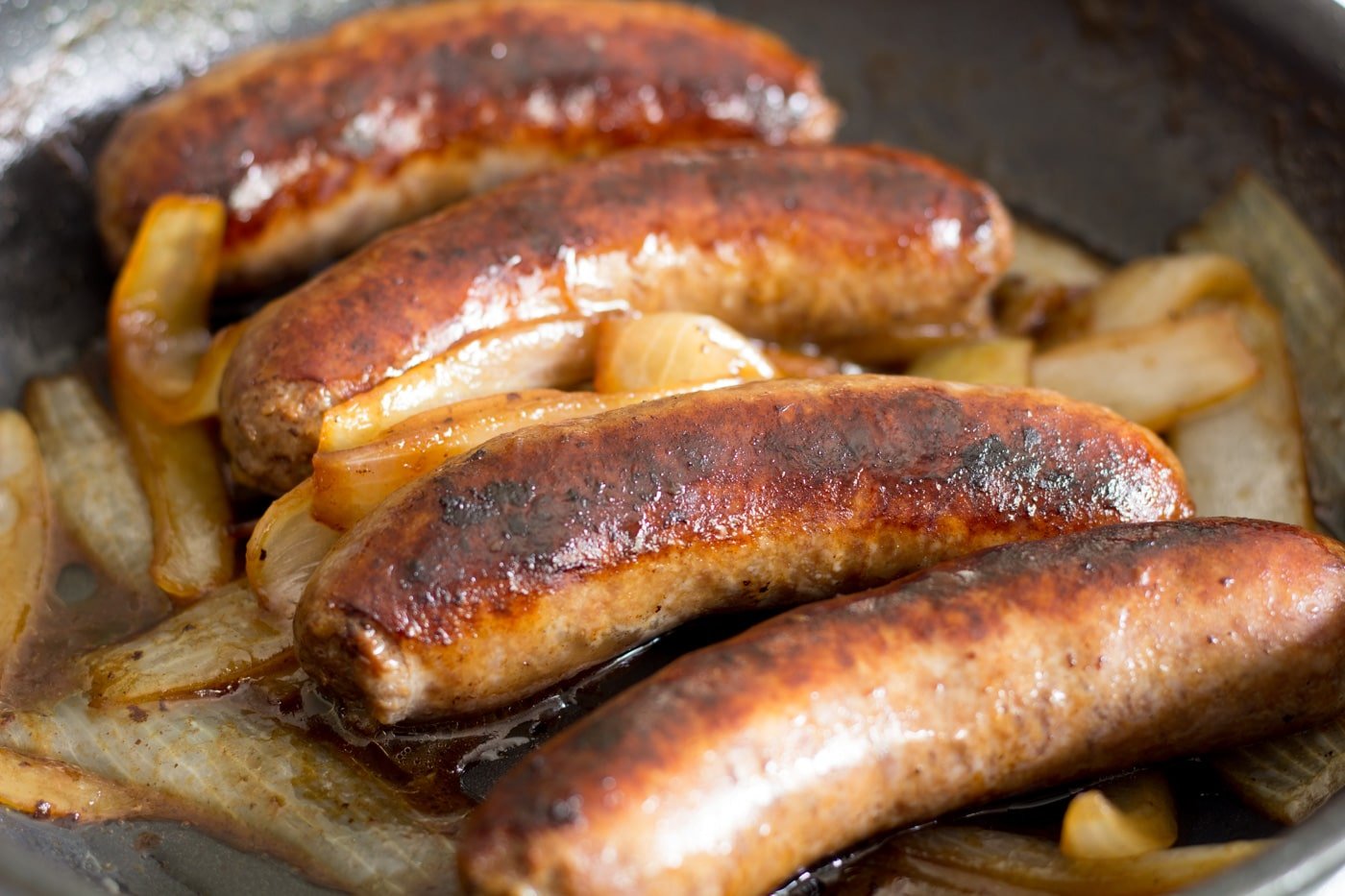 You can skip the simmering to if you don’t want onions. Keep browning, flipping frequently until they are completely done.  You know they are done when they no longer have any pink in the middle or register 160⁰F in the center of the sausage. You can finish them quicker by adding a lid to the skillet while cooking. You won’t have any liquid you need to cook-off.

Serve these while warm with a nice brown mustard or in a bun and topped with the beer-braised onions.

Sauerkraut that has been rinsed and heated through is a great topping. 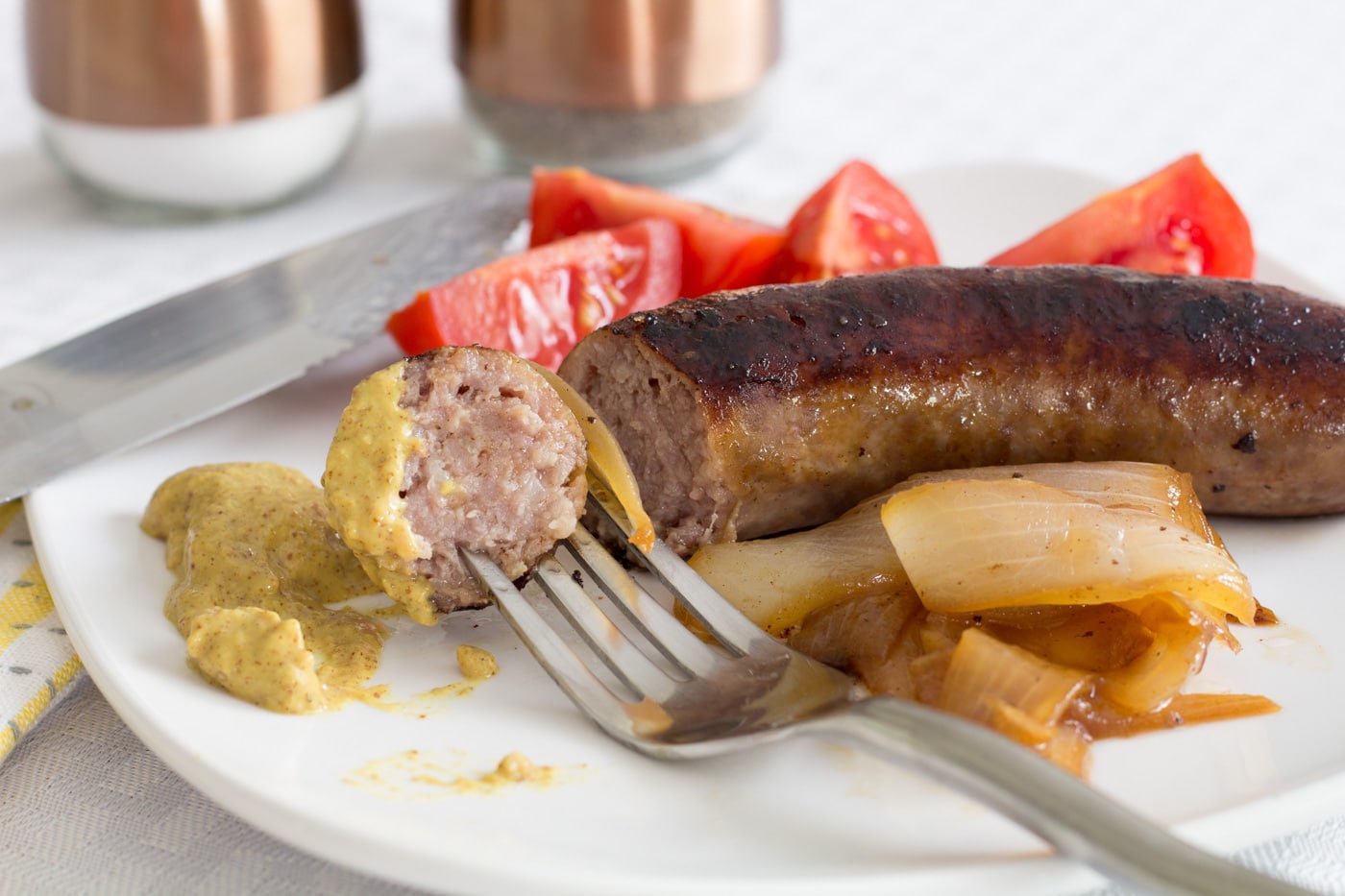 How to Keep Beer Brats Warm

The bratwurst can be held in a slow cooker that has been set to the “keep warm” setting or in an oven set to its lowest temperature.

You only want to keep bratwurst warm, adding too much heat after they have coked can dry them out.

Johnsonville’s recommendation for foodservice is holding brats at 140⁰F for up to 4 hours.

Refrigerate leftovers within 2 hours of cooking.

According to the USDA, leftover bratwurst can be stored in the refrigerator for 4 days or can be frozen for up to 3 months.

To reheat leftover brats simply place them onto a microwave-safe plate and microwave for 60 to 90 seconds or until heated through.

What to Serve with Bratwurst 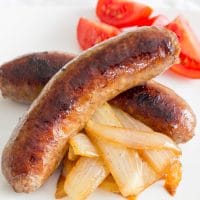 If doubling, only use as much beer as required to cover 3/4 of the brats, otherwise you will be simmering for so long the brats will dry out. 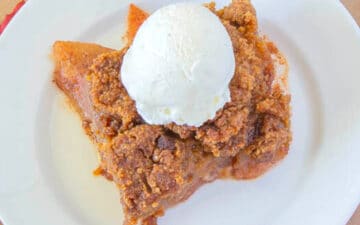 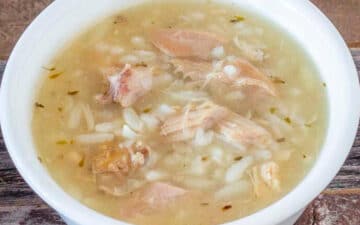 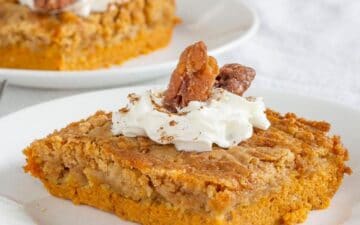 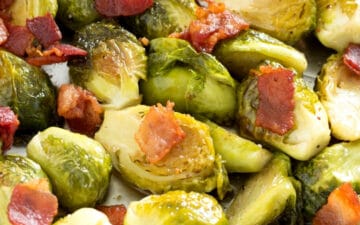 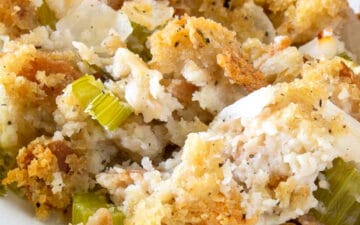 More of My Favorite Fall Recipes