Quick and easy recipe for breaded and fried pork chops that stay juicy and moist with a crunchy shell. The breading is always the best part and coating in a breadcrumb/flour mixture twice makes a slightly thicker coating.

It doesn’t matter if you call them breaded or fried pork chops, they are delicious!

Breaded pork chops can be made with boneless chops or bone-in chops.

Bone-in chops may take a few more minutes in the hot oil to cook the meat near the bone.  We think they are a bit more difficult to eat so I stick with boneless thick sliced butterflied pork chops.

Don’t try and cook entire butterfly chops, they are kind of big.  Cut them into half. 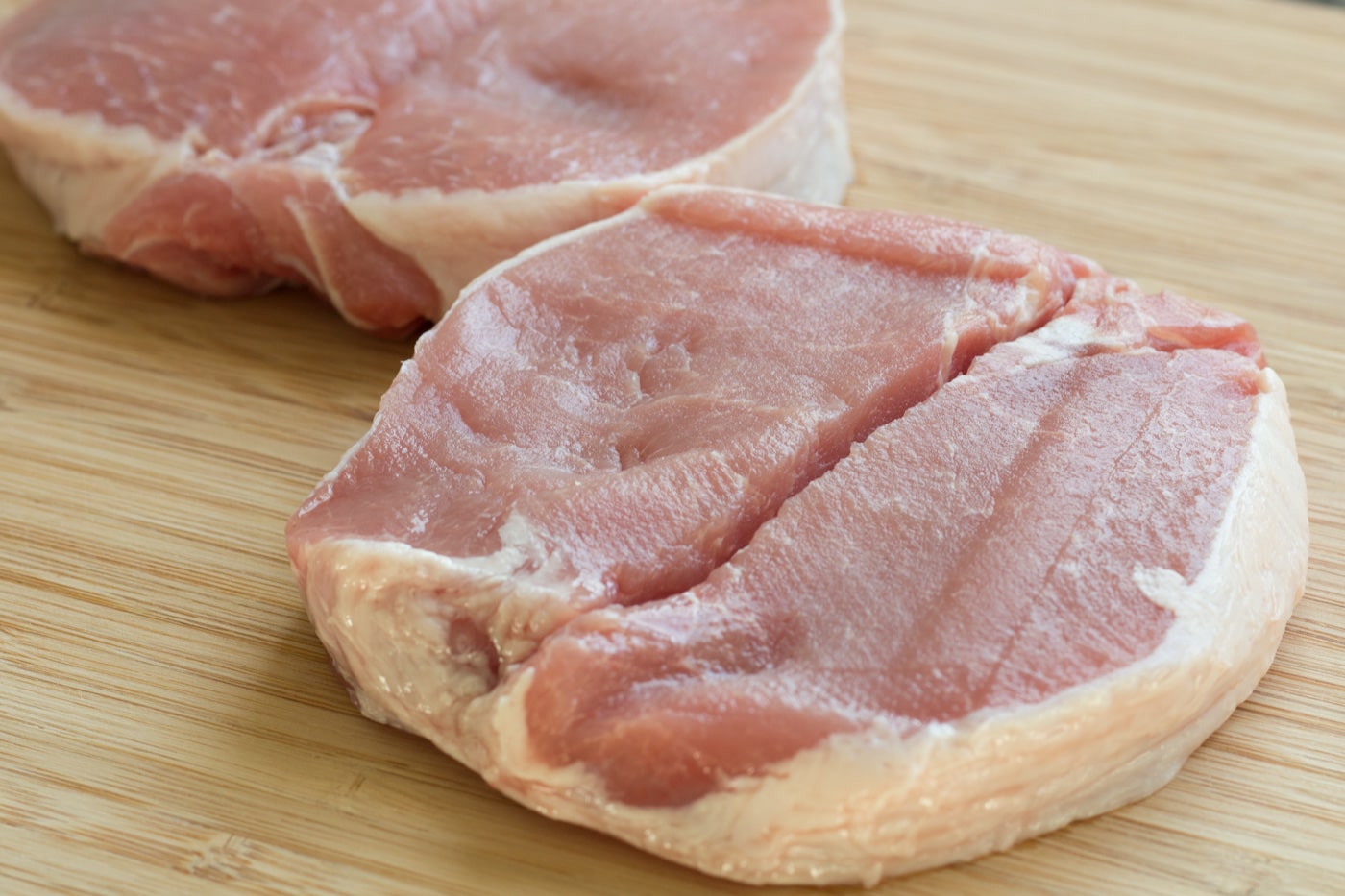 Use pork chops that are 3/4 to 1-inch thick.  Using thicker pork chops keeps the meat moist during frying.  Thinner pork chops tend to be finished before the crust has formed a golden brown and gives you dried out pork chops.

HOW TO BREAD PORK CHOPS

For the best results, dredge the pork chops in the flour and breadcrumb mixture before dipping in the egg wash.  Doing this first will give the egg something to hold on to rather than sliding right off.

Our breading method is almost identical to making German schnitzel recipes except we mix the flour and breadcrumbs together for ease and one less dirty bowl.

See all the bumps in the photo above?  That egg wash isn’t going anywhere!

Use a fork to flip the pork chops in the egg mixture to keep your hands clean.  Skipping this step may result in fingers covered in breading.

Once both sides are coated, sprinkle some extra mixture on top of the pork chops and give it a hard press.  Also, do the same with the sides, you want to make sure that everything is covered completely.

Sprinkle a bit of the breadcrumb/flour mix onto a plate and place the breaded chops on the plate to prevent them from sticking to the plate.

Save the breading until you have placed the last pork chop into hot oil in case there are some bald spots that need coating.

To make the most basic fried pork chops just coat them in flour that has been seasoned with salt and pepper.  Fry them in a small amount of oil until brown and flip them and finish cooking until brown and the pork is cook through.  Depending on the thickness of the pork chops this will take 5 to 8 minutes per side.

Double coating with a seasoned flour is also an acceptable method of frying pork chops.  I just don’t think they are as crispy as the ones that use breadcrumbs.

BREADING PORK CHOPS AHEAD OF TIME

Pork chops that have been coated using breadcrumbs and an egg wash can be breaded refrigerated up to 24 hours in advance of making them.

You may want to hold on to some of the breading to fill in spots right before cooking.

For the best results, scatter some of the breading on a plate before placing the breaded pork chops on it.  If you can’t get all of the pork chops into a single layer, add a bit of extra coating between the layers of pork chops.  Make sure to shake off the excess coating before frying.  All of the loose flour and breadcrumbs will settle into the bottom of the skillet and burn. 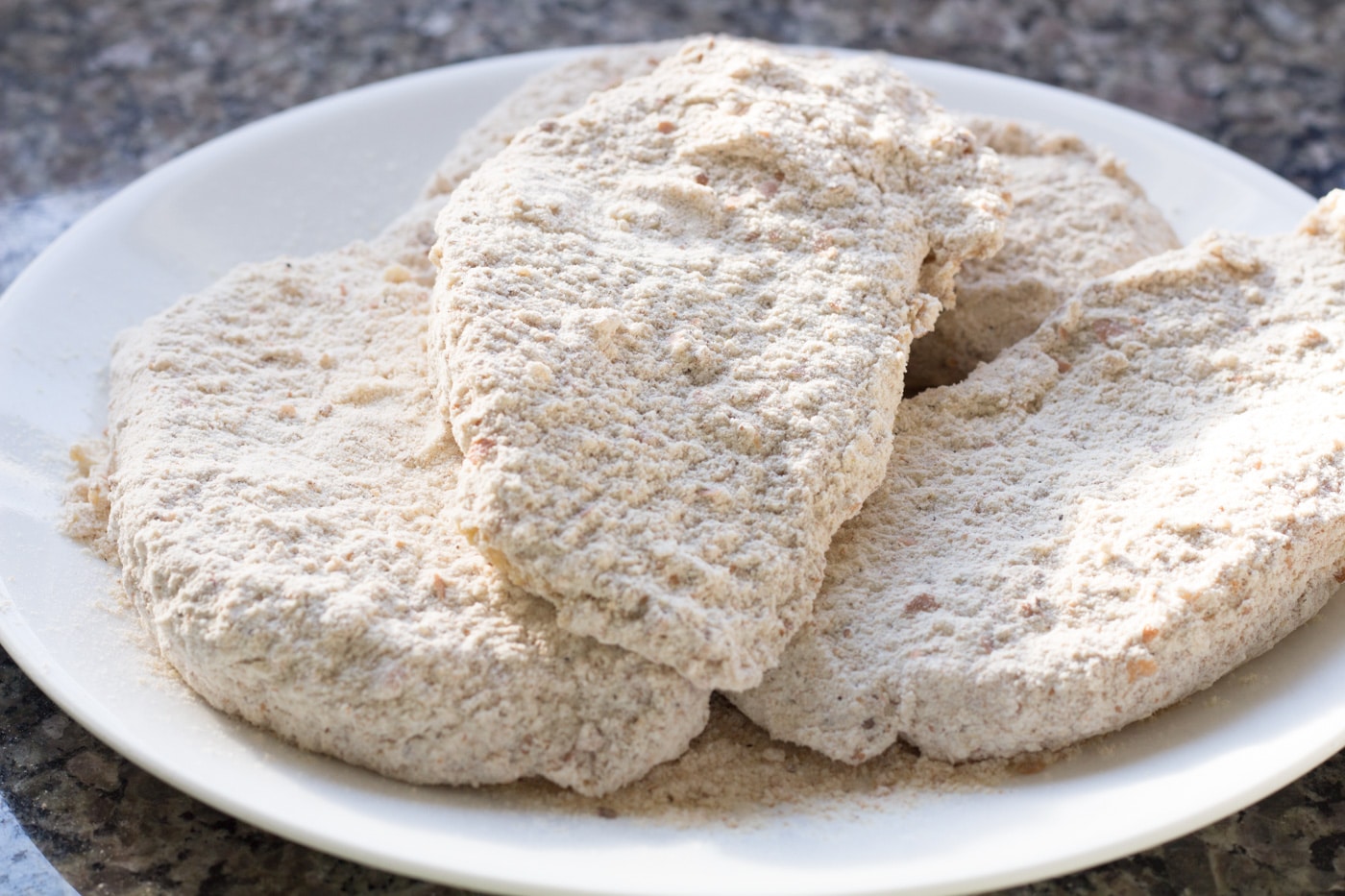 Use enough oil in a pan to cover at least half of the sides of the pork chops when they are added to the hot oil.

Use medium-high heat and allow the oil to heat before adding the pork chops.  The best way to tell if the oil is hot enough is to add a loose piece of breading from the plate.  If the breading begins to sizzle immediately the oil is ready.

If the piece of breading begins to sizzle like you just added frozen French fries to the pan or browns immediately, the oil is way too hot and needs to be removed from the heat until it has cooled back down.  When you put the pan back on the heat reduce the stove setting a little.

Pork chops need to be fried at a lower setting because you want the pork to be cooked all the way through before burning the breading.

As soon as the pork chops have turned a golden brown on the bottom and the sides, carefully flip it over and fry until the other side is golden.  Remove a pork chop with some tongs and test the middle of the pork chop with an instant-read thermometer.  If it reads 145⁰F they are done.  145⁰F is the internal temperature recommended by the National Pork Board.

If the pork chops have not reached a safe temperature, give them a few more minutes on each side.

Allow the pork chops to drain on a cooling rack or paper towels for a few minutes before serving. 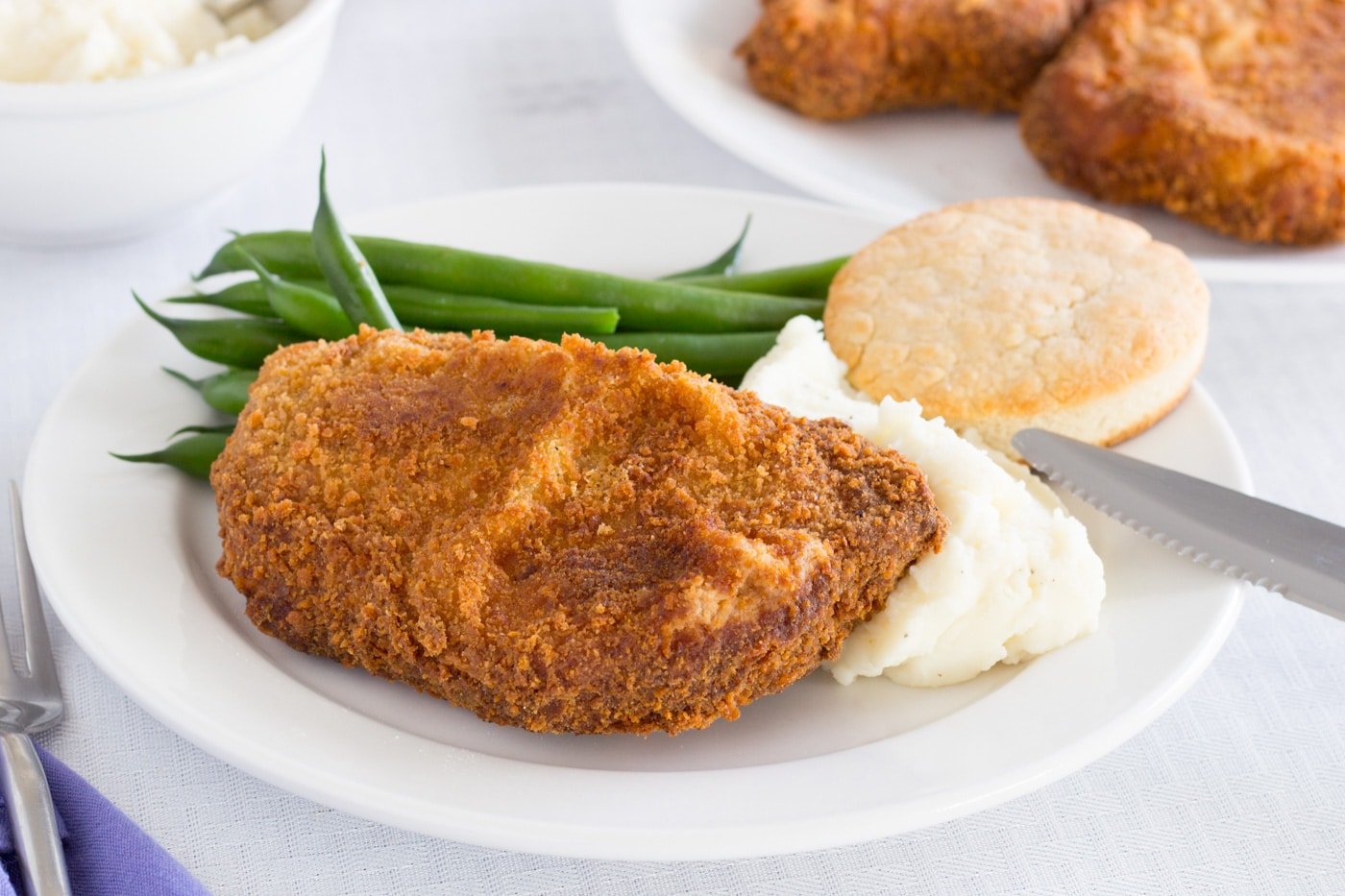 The best oil for frying pork chops is a light flavored cooking oil like vegetable or canola oil.  Peanut oil can be used, but it is a bit more expensive.

The oil used for breaded anything is rendered useless after cooking.  There will be tiny bits of browned flour and breadcrumbs that will be almost impossible to filter out. 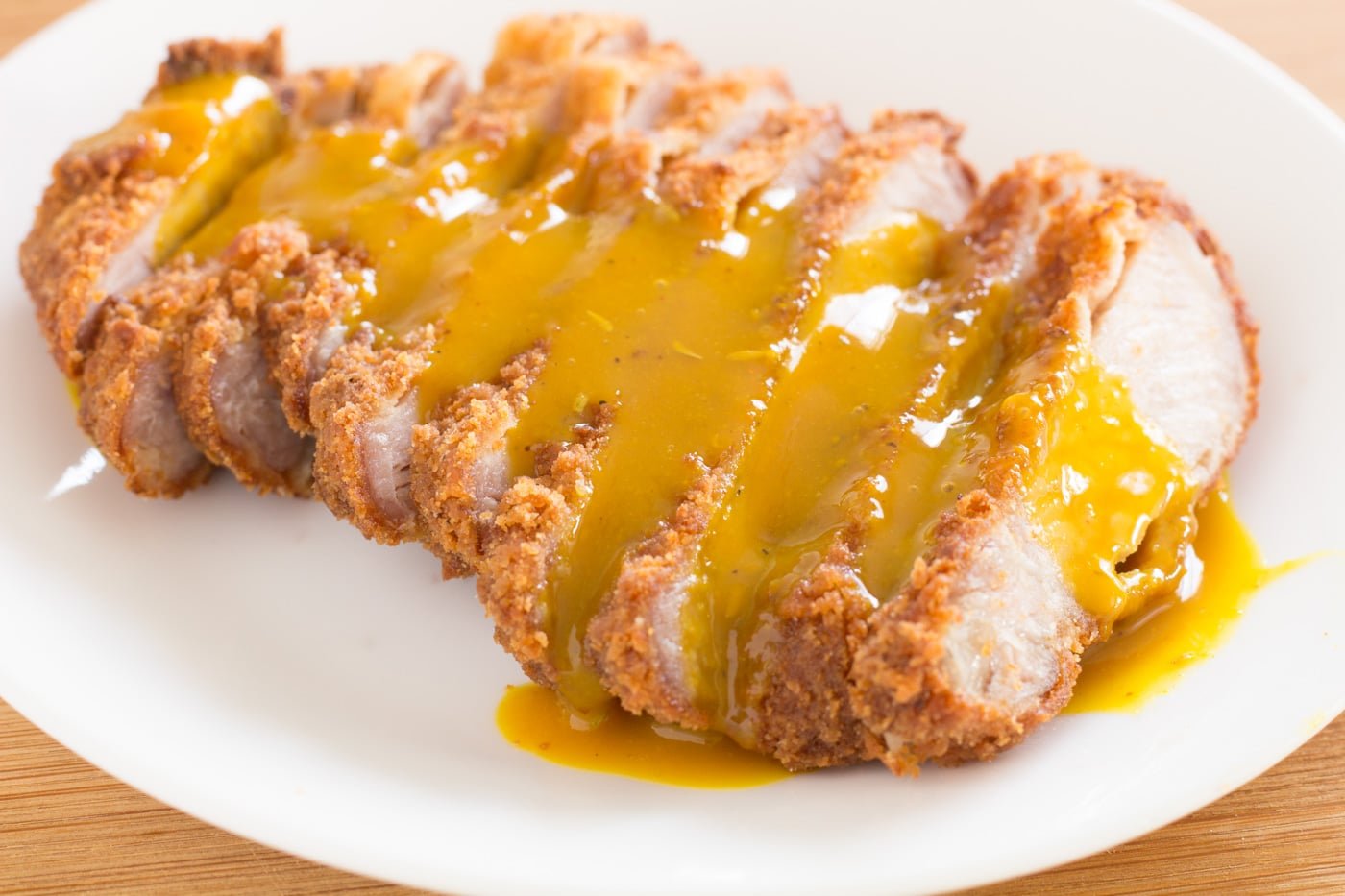 I serve my fried pork chops with a honey mustard dipping sauce.  Mix 1/2 cup of yellow mustard and 1/2 cup of honey in a bowl.  Add a pinch of Cajun or Creole seasoning along with 1/2 teaspoon of dried thyme and mix well.  More seasoning can be added for bolder flavors if desired.

Applesauce is another great option for dipping!  I know you just heard Peter Brady in your head “Pork chops and applesauce.”

WHAT TO SERVE WITH PORK CHOPS

Fried and breaded pork chops go with just about any potato side dish and vegetable.  Here are a few of our favorite sides to serve with pork chops. 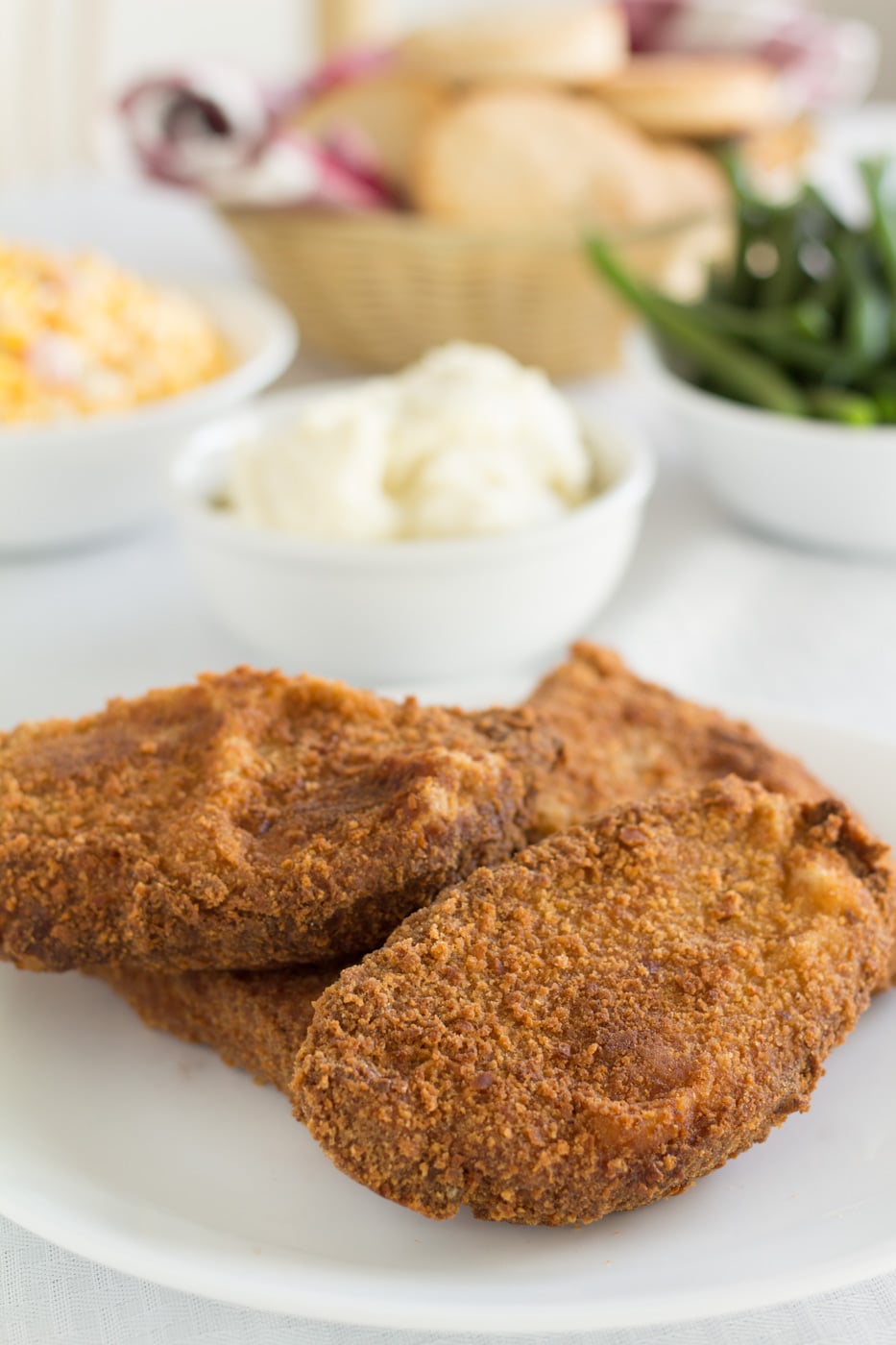 Leftover pork chops can be stored in the refrigerator for up to 3 days.

The breading will not be as crispy as when they were first made.  Moisture is going to find its way into the breading.

These pork chops can be reheated in the microwave at full power for 2 minutes or until heated to 145⁰F in the middle.  You might find that the breading is a little soggy and the meat will be tougher than the day they were made.

As with all leftover pork, this should be cooked until the center is 145⁰F.  Yes, I have repeated this throughout the post so I hope you have taken the hint and know that pork has a high risk of bacteria if not cooked or reheated properly. 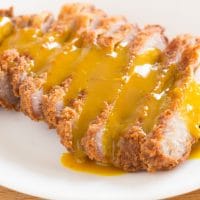 To make honey mustard dipping sauce: Mix 1/2 cup of yellow mustard and 1/2 cup of honey in a bowl.  Add a pinch of Cajun or Creole seasoning along with 1/2 teaspoon of dried thyme and mix well.  More seasoning can be added for bolder flavors if desired. Calories provided assumes a 1 1/2 teaspoon of oil retention per pork chop. This amount will vary greatly dpending on oil temperature and time spent n the oil.