Chicken and Vegetable Frog eye soup was invented in my kitchen because of an ingredient shortage. 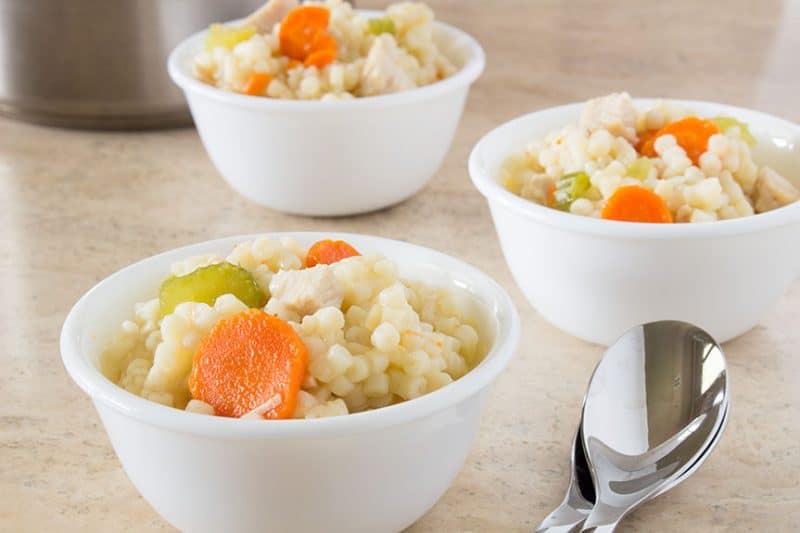 We had plenty of groceries in the house.  I am certain I was cooking for some holiday meal in the coming days.

My brother was making an unexpected visit that evening and I offered to make some homemade chicken noodle soup and sandwiches for dinner.

I usually have chicken noodle soup ingredients on hand and I knew this would not require another trip to the store because everyone knows I love chicken soup!! 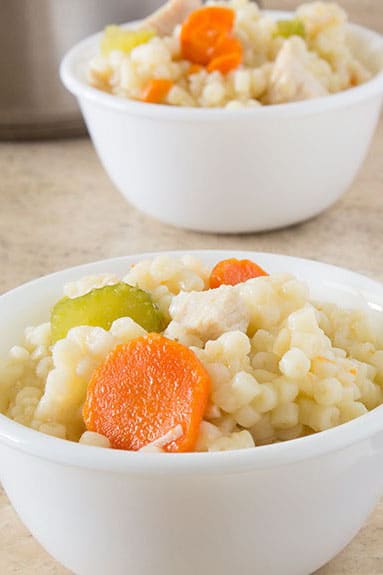 I happily went about my business in the kitchen and started simmering some chicken breasts in chicken broth.  I don’t always make a super-rich broth, especially when I am short on time.

I tossed in some onions, celery, and carrots.

About 20 minutes before my brother was scheduled to arrive I discovered I had no soup noodles!!

What?!?!?! At my house?  What I did have was a bag of acini de pepe. I had planned on making frog eye salad for a holiday meal side.

I tossed the entire bag into the boiling broth. As the pasta cooked, it grew larger and larger.

A whole bag was too much.

For whatever reason, there was a delay in dinner time that night so I turned off the soup.

As the soup cooled, the noodles grew even larger.

Eventually, there was just pasta balls, chicken, carrots, and celery, the broth has soaked up into the pasta.

When my brother finally arrived, he was unaware of my mistake.

He grabbed a bowl of “soup” and made his way to the table. He took one bite and loved it.  He asked me what it was. 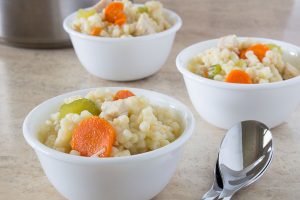 I blurted out frog eye soup!! I figured if the pasta was for frog eye salad, it would also be called frog eye soup if its intended purpose was soup.

From that day on my brother would sometimes ask me to make frog eye soup. So the name has stuck, even though it is more like a pasta dish rather than a soup.

That name has also worked wonders with getting kids to eat some vegetables hidden in a bowl of frog eyes.

I have also adapted it around Halloween into Witch’s Stew by adding some fresh spinach and a few drops of green food coloring.

We love making grilled cheese sandwiches using rustic crusty bread when eating this.  Yes, it is kid friendly, but I love it too!

Israel couscous can be substituted for the pasta balls.  If you can’t find Israeli couscous you may find it labeled as pearl couscous. 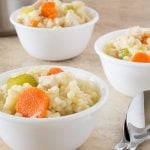 Bouillon cubes can be omitted for lower sodium requirements.