Homemade Southern Sweet Cornbread is served with just about everything in the deep south.  Most Southerners prefer their cornbread, the same as their tea. SWEET! 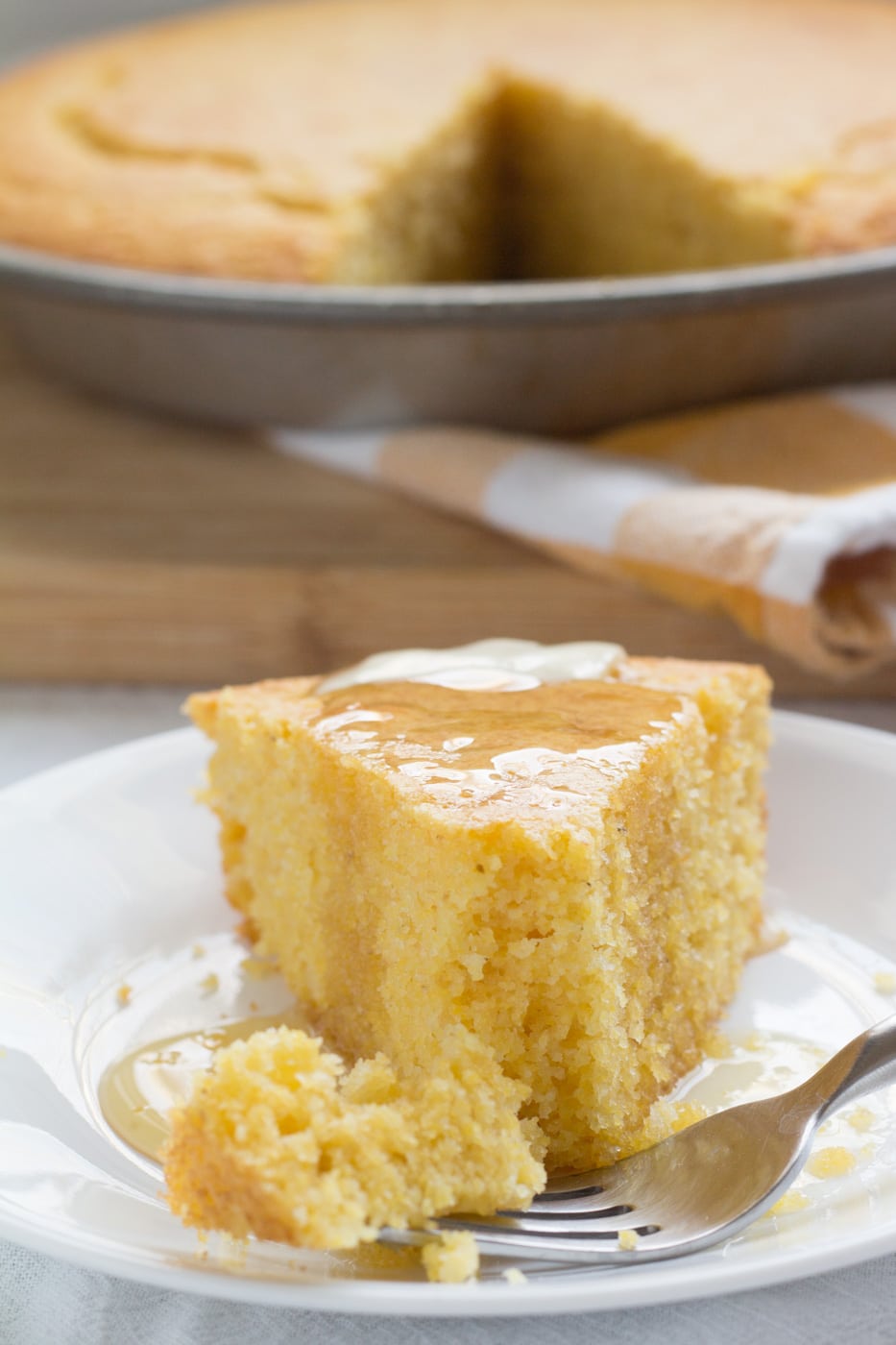 Rarely will you see collard greens, black-eyed peas, ham and beans, or even green beans served without cornbread for mopping up the last of the potlikker.

For those of you not from the South, potlikker is also known as pot liquor, or better yet, the tasty liquid left behind that you want to drink.  Unfortunately, proper Southern table manners do not allow drinking from your plate.

Now, this one is kind of sweet, but not so sweet it feels like dessert.  This one can handle butter and honey without being sickly sweet.  The texture is not cake-like either.  It is moist but will crumble if manhandled.

I prefer this one plain or with a bit of butter spread on while it is hot.

Our recipe uses brown sugar because it adds an additional layer of flavor.  Plain white granulated sugar can be substituted.

I suppose this means that regular milk can be substituted in this recipe.  I warn you though if you substitute the brown sugar and the buttermilk you forfeit the right to comment or email me that this was not a successful, moist, or tasty cornbread recipe. 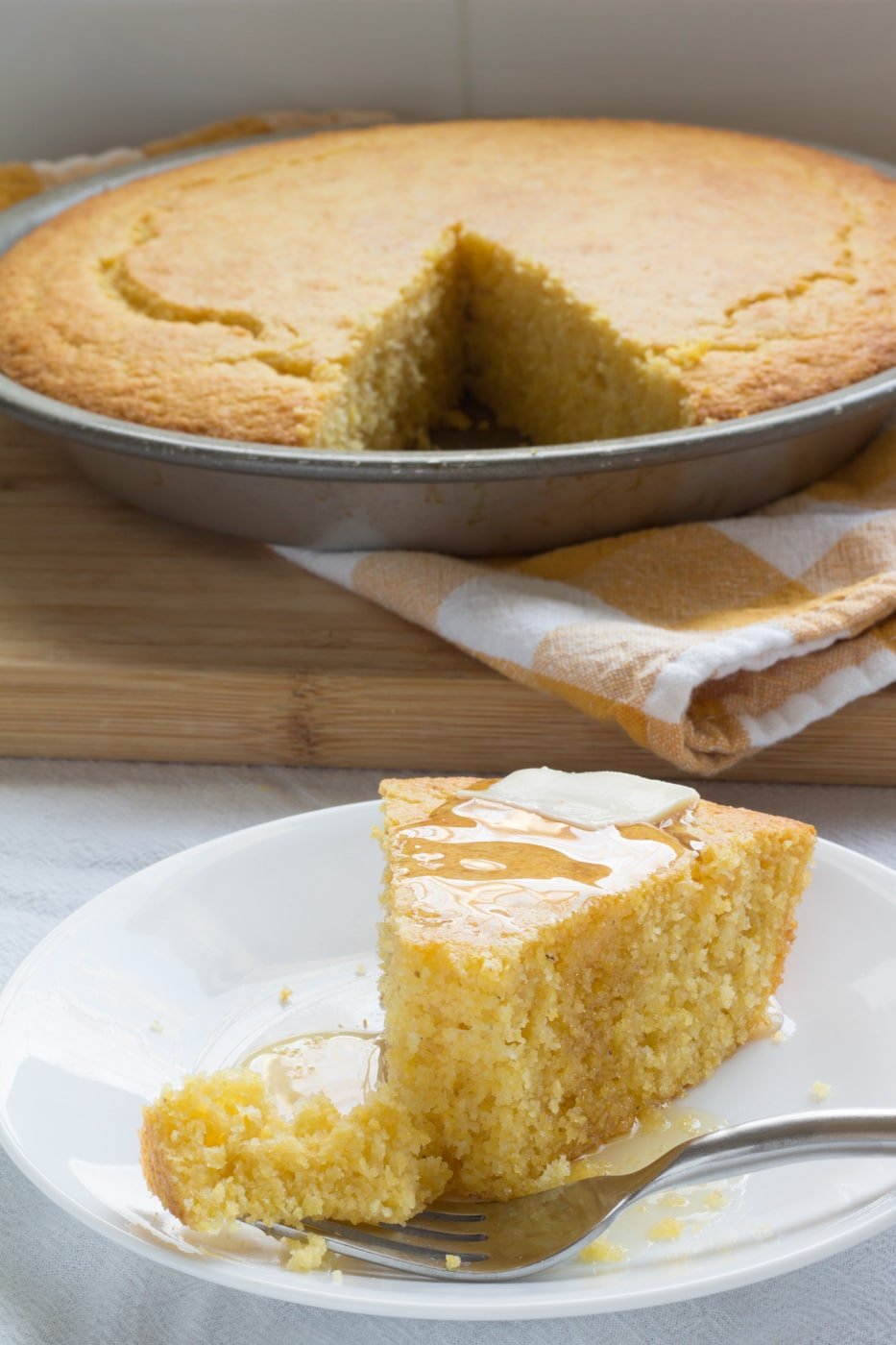 OUR SECRET FOR THE BEST CORNBREAD FROM SCRATCH

Our cornbread is not a fall apart crumbly cornbread.  It has a bit of a crumb, but it will not crumble the second you try and put butter on it or pick it up.

This is moist enough that butter is not required.  But it is not so moist you feel like you eating cake either.  It is, IMHO, the perfect texture.

Soaking cornmeal in buttermilk for a bit before making the batter is our secret weapon for keeping it moist. 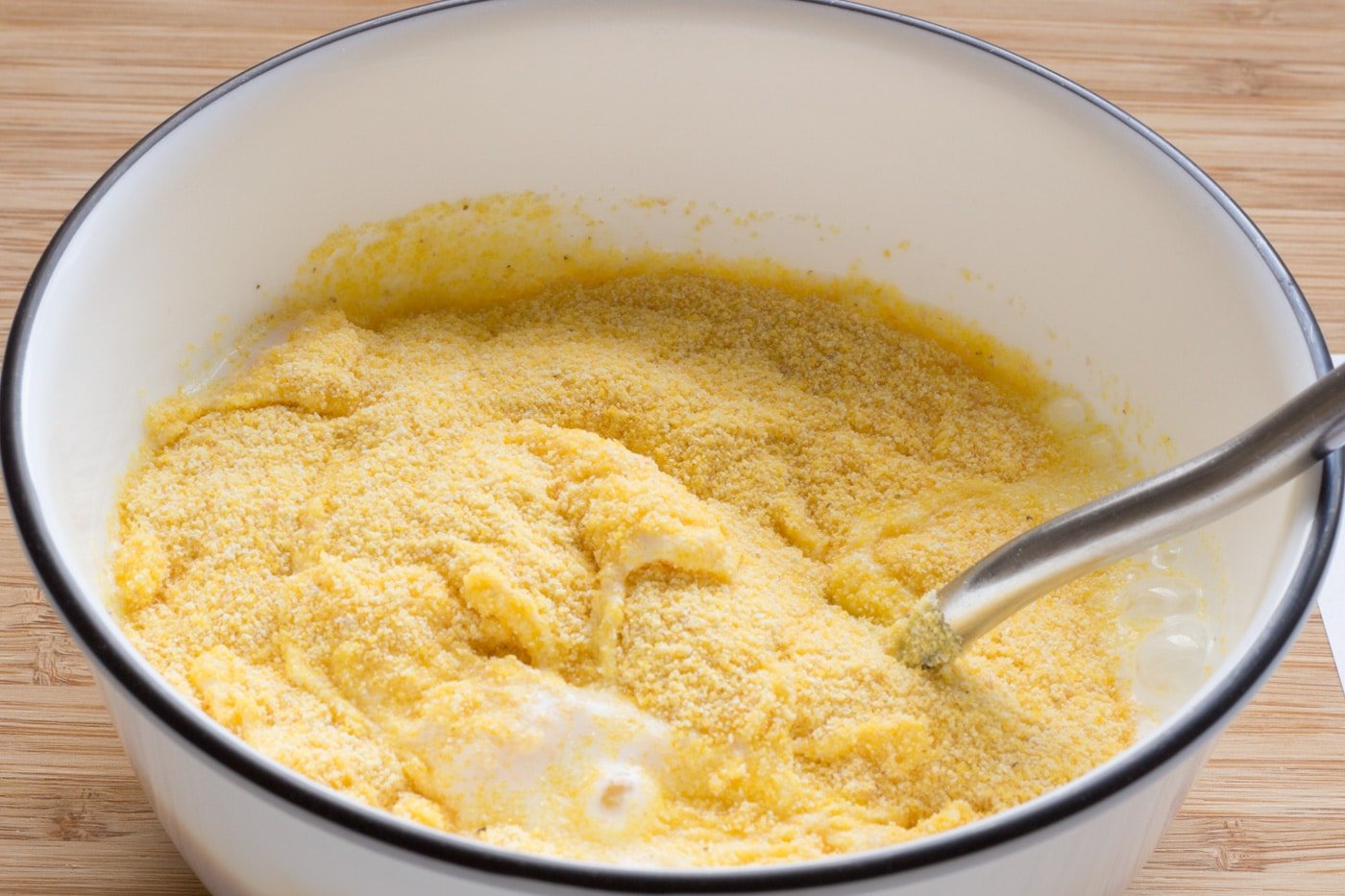 I do not recommend skipping this step, nor do I recommend allowing the batter to just sit after mixing in the hopes of soaking the cornmeal that way.

Instead, the baking powder will cause the batter to puff up early and possibly fall while baking.  That, my friends, will result in a gummy cornbread and absolutely no one wants that. 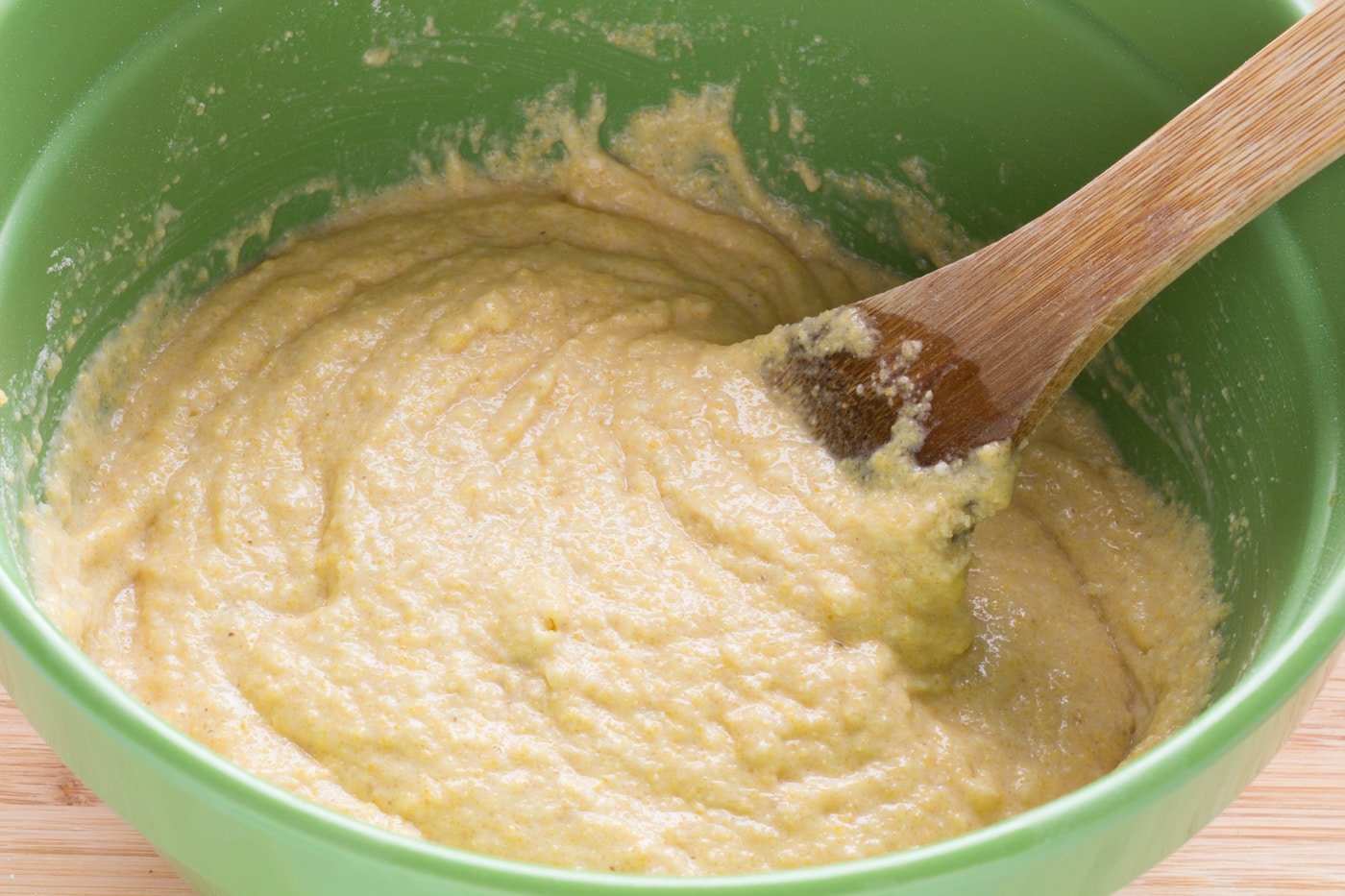 Do not beat or mix the cornbread batter until it is completely smooth.  A few lumps are fine, just like pancake mix.  Beating too much will make your cornbread tough.

A good southern cornbread should always be tender!

To achieve a classic southern cast iron skillet crust, the skillet needs to be preheated in a 400 Degree F oven for at least 20 minutes.

That skillet needs to be screaming hot before adding the batter.  The pan must also be placed immediately into a hot oven for even baking since the batter on the bottom of that skillet has probably already cooked.

If you go the cast iron skillet route, make sure that the pan is coated with a nice layer of butter, lard, or shortening before adding the cornbread batter.  Most cooks add the fat the last few minutes of pre-heating the skillet in the oven.

I do not use my cast iron cookware for baking loaves of bread unless I am making my Artisan bread.

Baking in a cast iron skillet seems to dry out my pan and then it requires another round of oiling and slow baking to make it nonstick again.

I prefer using a standard pie pan for this recipe.  It allows me to make nice even slices that slide right out of the pan.

I can also set the pie tin on the dinner table and serve straight from there.

Our cornbread recipe can be made into cornbread muffins too!

Just fill each muffin hole about 3/4 full, reduce the oven temperature to 350 Degrees F and bake for 15 to 20 minutes or until a toothpick inserted into the center of a center muffin comes out clean. 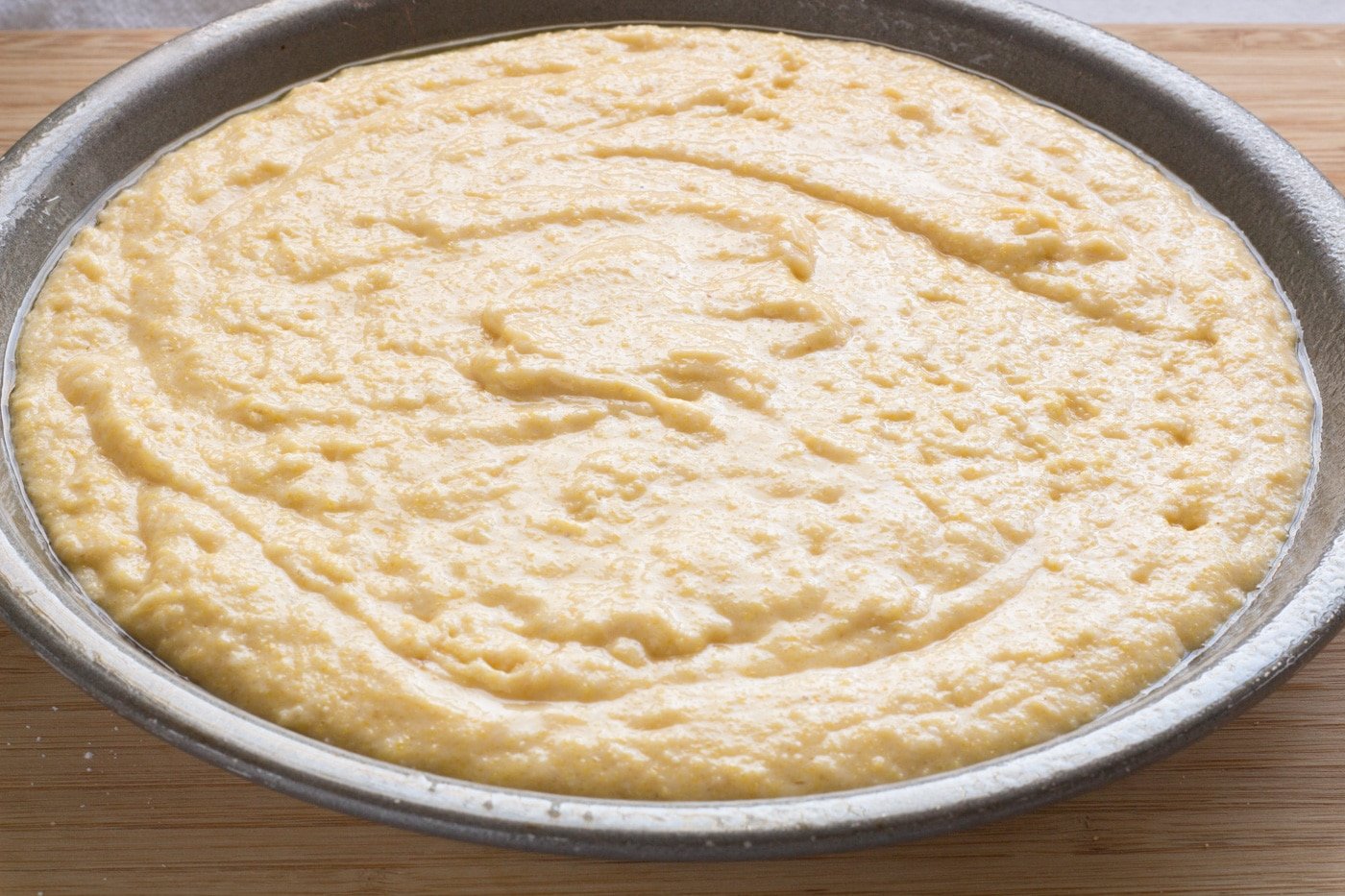 HOW TO TELL IF CORNBREAD IS DONE

Cornbread is done when a toothpick inserted into the center of the pan comes back clean.  Depending on the size of the pan used, this should take 20 to 25 minutes.

HOW TO SERVE HOMEMADE CORNBREAD

Serve cornbread, hot or at room temperature, with a side of butter.  We prefer it hot so any added butter melts into it!

You can just add the baking pan to the table and serve it right from the pan or you can set it into a bread basket.  It goes with just about anything bread and butter would go with.

It’s also great served with a bit of honey drizzled on top! 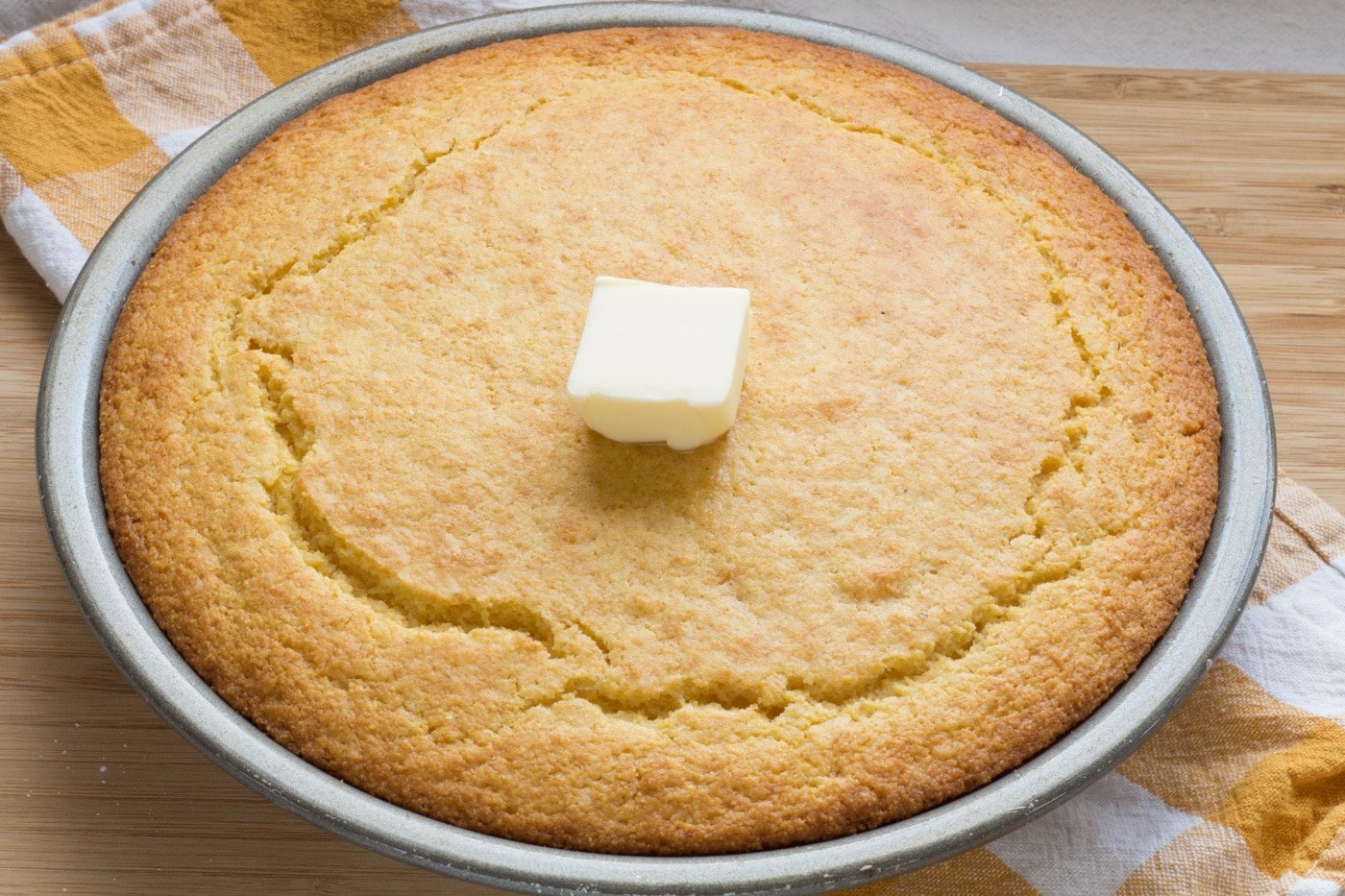 HOW TO STORE LEFTOVER CORNBREAD

Wrap leftover cornbread in plastic wrap or place into an airtight container.

Leftover cornbread will last for a day or so before it starts to get stale.  Leftovers can be sealed tightly and placed into the refrigerator for up to 4 days.

Cornbread stored longer than this will still be edible, as in not dangerous, but it will start to dry out.

Put the leftover cornbread into an oven-safe dish a and cover with aluminum foil.  Place into a preheated 350 Degree F oven and bake for 15 minutes or until the cornbread is heated through.

To reheat cornbread in a microwave oven, place it onto an oven-safe plate and microwave for 15 seconds.  Heat for an additional 15 seconds if necessary.  Avoid overheating the cornbread or it will get tough.

To reheat dried out cornbread, wrap it in a damp paper towel and microwave on full power for 15 to 30 seconds.  Check the cornbread and repeat if necessary.

Crumble a piece of cornbread into a glass of milk, sweet milk if you’re truly southern, or buttermilk.  Break out a spoon and eat it!  Please don’t judge this snack until you’ve tried it!

Cut it into cubes and fry in some butter in a skillet.  Once the cubes are browned, add some well-beaten eggs to the pan and cook until the eggs are done for a filling breakfast.

Use it for stuffing pork chops.  I don’t mention stuffing chicken or turkey because I don’t like to place anything I intend to eat inside poultry.  The risk for foodborne illness is too high for me.  You could use it for cornbread stuffing but this recipe is a bit sweet and there is some serious debate about putting sweet cornbread into the stuffing. 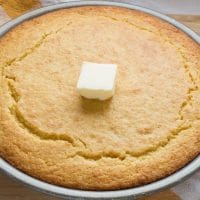