Fun and unique way to serve individual pizzas.  Pizza Pot Pies are cooked like a traditional pot pie with the crust on top, then flipped to exposed a deep dish pizza! 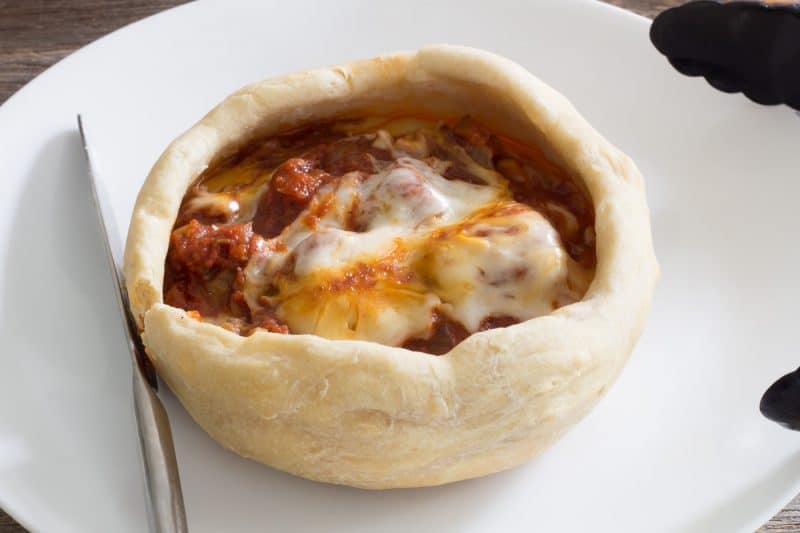 What is a Pizza Pot Pie Anyway?

A pizza pot pie will remind you of a Chicago deep dish pizza without waiting an hour or so for the pie to be cooked.  It also has a thinner crust.

When you flip this bad boy over you will find a gooey layer of cheese atop all the piping hot chosen fillings.  Now it is right side up.

Unless you live near Chicago, you aren’t likely to find an upside down pizza.

This is not a casserole that uses any refrigerated crusts or crescent doughs.

This one uses a yeast pizza dough.  You can make your own favorite pizza dough or even buy some yeast dough at some grocery stores. 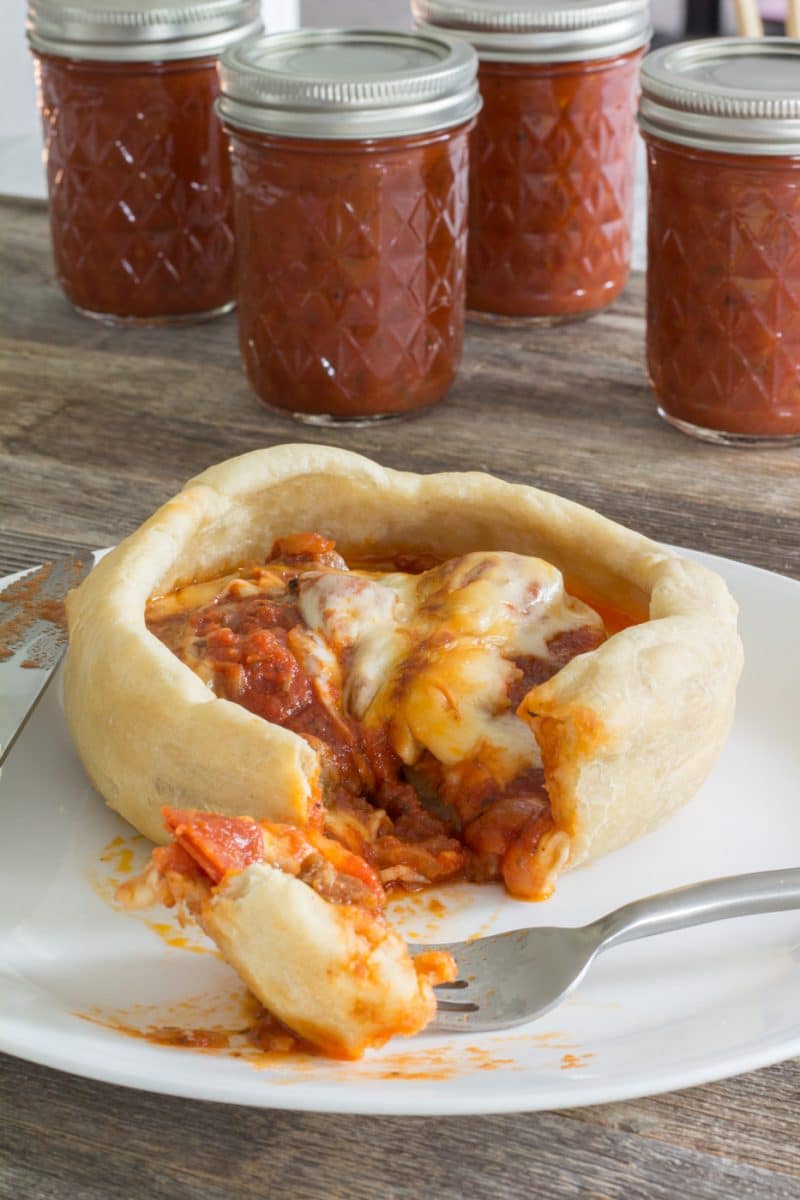 Individual pizza pot pies give you the freedom to make everyone their own personalized pizza!

Like extra sauce? No problem, add extra!  The only limitation to your pizza is the size of the bowl being used.

What size bowl is best for making pizza pot pie?

I use my 1-ounce Pyrex custard cups, they are oven safe.  Using anything much bigger than that and the pot pie is so big it needs to be shared.

Whatever bowl or vessel is used to make these, it must be oven safe!!

A straight sided bowl may release easier.  I only have large straight-sided oven safe bowls and those are way too big for us.

Large bowls will also be harder to remove from the inverted pizza.  The bowl is going to be super-hot.

Preparing the Bowl for Baking a pot pie pizza 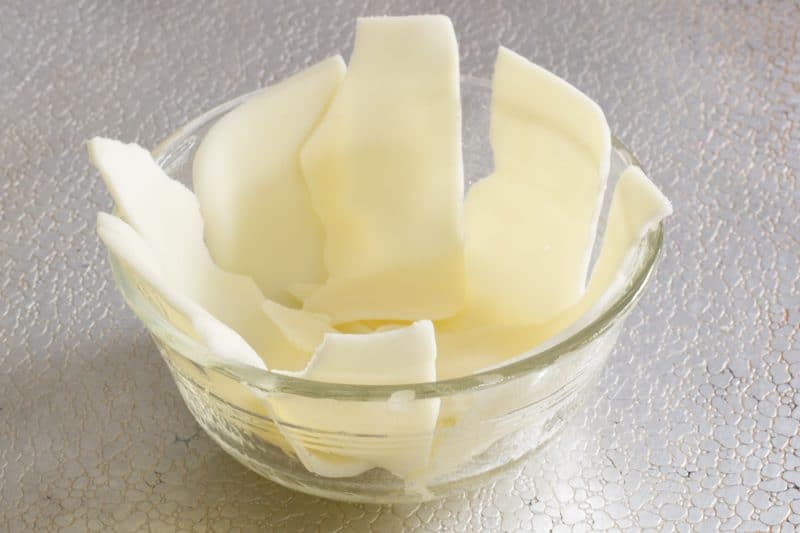 How to Add Cheese a Pizza Pot Pie

Cut each slice of cheese in half. Unless you are being lazy like me, then tear them into halves.

Since the insides of the bowls have been sprayed with cooking spray, the cheese needs to be placed 2 pieces at a time on opposite sides.  Overlap the ends of the cheese in the middle of the bowl.  This keeps the cheese from sliding down into the bowl and leaves a nice cheese puddle when it’s cooked.

8 half-slices of cheese will completely cover the bowl and will produce an extra cheese type pizza pot pie.  Less cheese can be used.

Once all of the fillings have been placed on top of the cheese I add a slice of provolone cheese.  One round slice fits perfectly into the Pyrex bowls.  This layer of cheese is totally optional.  Mozzarella cheese could also be used.

The pizza pot pies served in Chicago have large mushrooms packed into the center, which is what holds up the crust.

We don’t care for half-cooked mushrooms here, so we either use sliced mushrooms or skip them all together.

Prepare any meat fillings ahead of time, as in, cook your sausage if using Italian sausage.

Additionally, if you made homemade pizza sauce, make sure it is cooled.

I do recommend making your own pizza sauce for this recipe.  If you are going to go to all this work for a pizza pot pie, you might as well make it the best.

Besides, homemade pizza sauce is super easy to make.

I start with about 2 tablespoons of pizza sauce placed directly onto the cheese.  This is why I use cooled fillings.  I do not want that cheese to start melting until everything is assembled and in the oven.

Any pizza topping can easily be added to a pizza pot pie, just make sure that they are bite-sized. 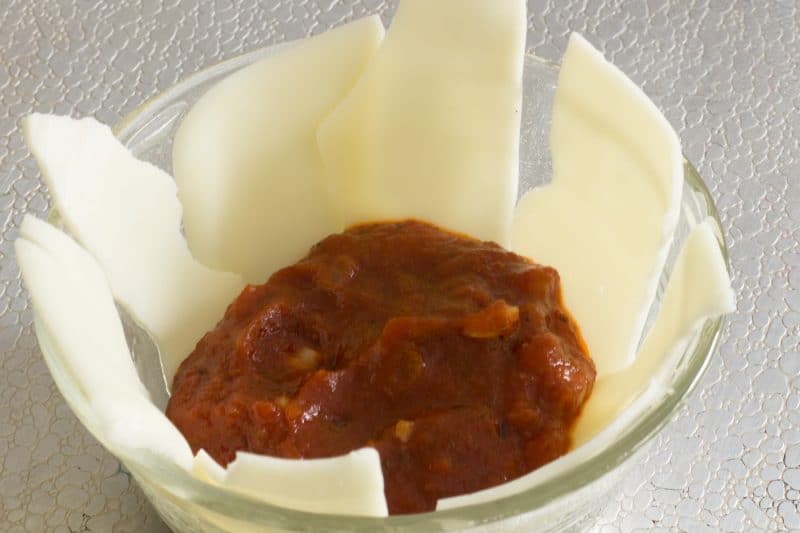 I cut my pepperoni into quarters, although mini pepperonis would also work and fit well into lazy days.

When adding vegetables they would ideally be sliced fairly thinly so that they have a chance to cook.

Add as much of any filling that you like.  Just remember to leave some room for extra sauce and more cheese if desired.  Do not overfill the bowl or the fillings will run out and pop the dough off the sides. 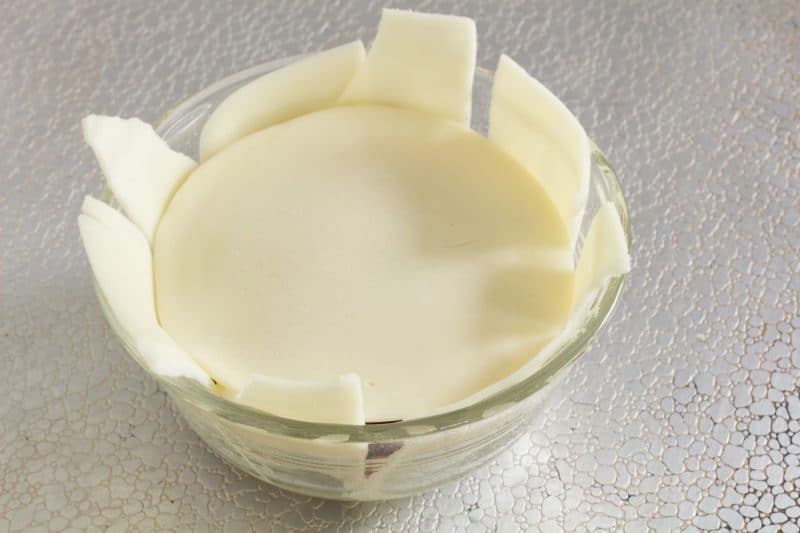 The pizza dough for the top of the pot pie needs to be stretched out so that there is about an inch to an inch and a half overhang all the way around the bowl.

I do not use a rolling pin.  Using a rolling pin on yeast pizza dough can deflate all of the air bubbles in the dough. 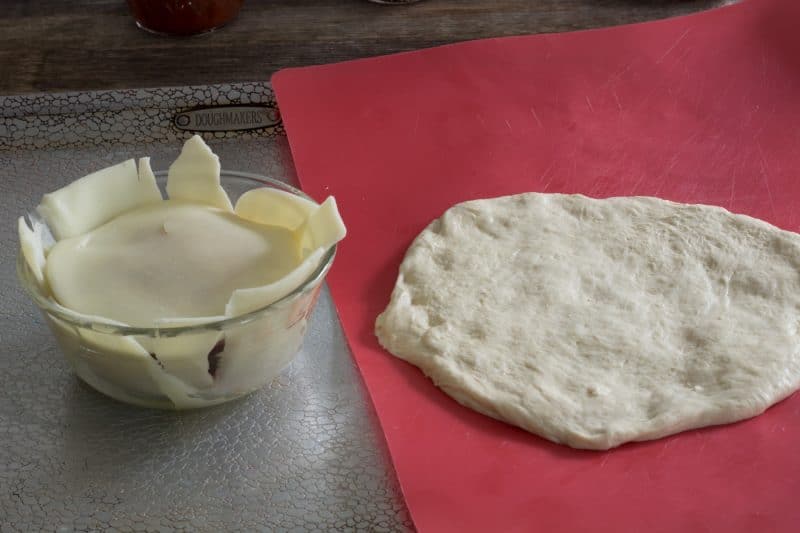 Just place the dough right on top.  Any excess dough can be cut off with kitchen scissors or a knife.

Try and make the overhang fairly even to avoid a lopsided pizza pot pie.

Place the assembled pizza pot pies onto a baking sheet to catch any filling that oozes out when the filling starts bubbling.

Our recipe for pizza pot pie calls for baking at 400⁰F.  This temperature will cook the crust without browning the cheese on the bottom too much.

The crust and the cheese will turn darker the longer it is cooked.

An egg wash can be applied to the crust for a really dark crust.  I don’t think it adds anything to the end product so I don’t do it. 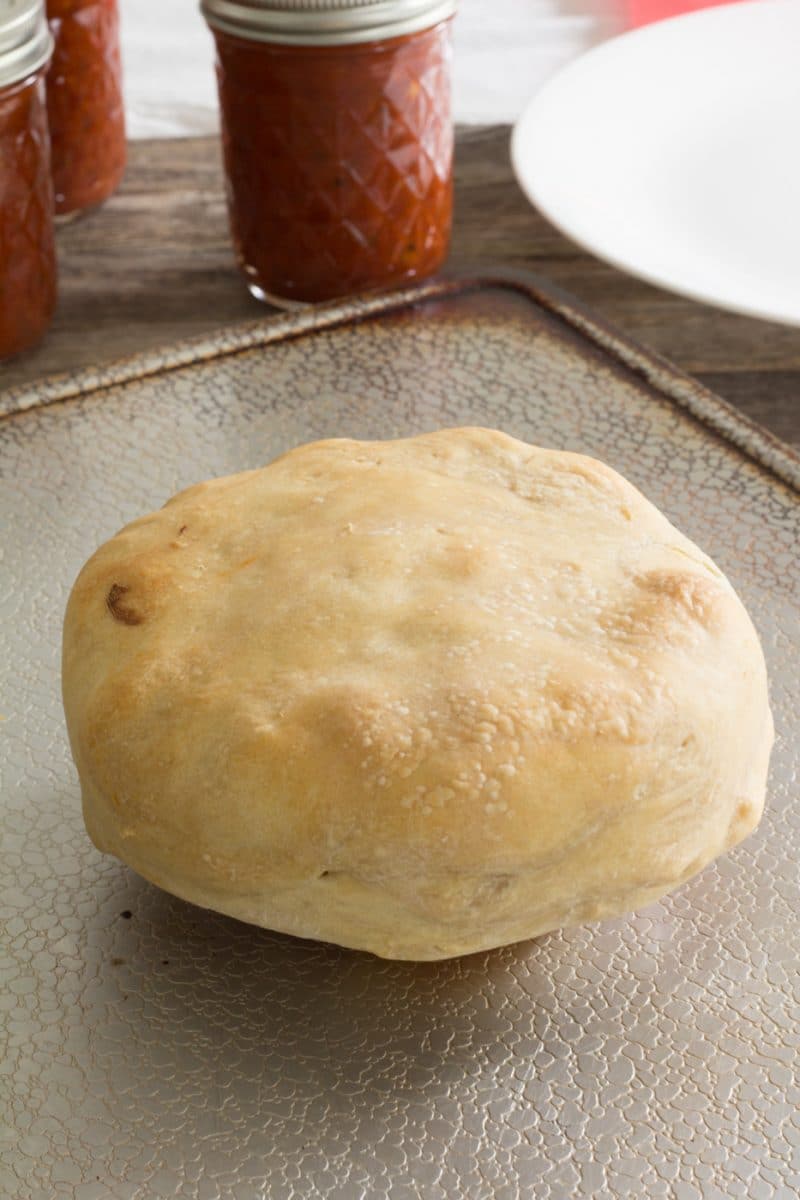 How to Remove a Pizza Pot Pie from a Bowl

Pizza pot pies will stay hot longer if they are left in the bowl.  I do not remove the bowl until I am ready to serve them.

The best way to remove the bowl from the pizza pot pie is to use some kitchen tongs and a pot holder.

Grab the entire pot pie with tongs placing the tongs on the crust and the bottom of the bowl.

I find that the crust needs to be gently pried away from the custard cup with a butter knife or a flat spatula.

Once the crust is free, stick the tongs under the bowl and lift.  The cheese may be sticking to the bottom of the bowl.  It’s OK, just loosen the cheese with a fork or a spatula while holding the bowl with the tongs.  Be careful, that bowl is hot.

If at all possible, I use the tongs to grab the entire bowl and remove it.

Otherwise, use a fork to lift the bowl far enough to be able to grab it with a pot holder or kitchen towel. 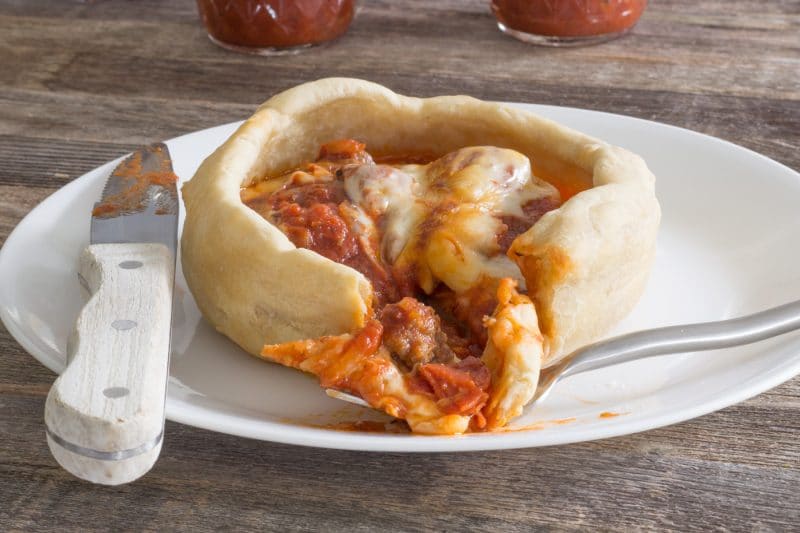 Serve these piping hot with a fork and a knife. 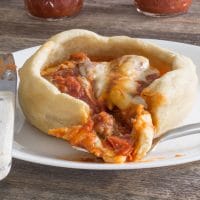 If using Italian sausage or any other raw meat, cook and cool prior to adding to the pizza pot pie. Nutritional data does not include additional toppings.