Bacon Wrapped Water Chestnuts served with a Worcestershire based sauce, are the perfect blend of salty and sweet. 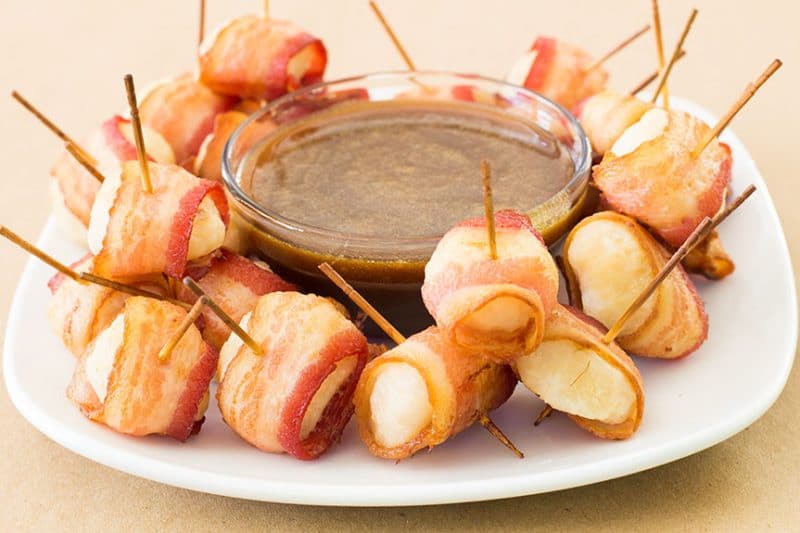 I have been making this Bacon Wrapped Water Chestnut recipe for over 30 years.

I am sure this came off of the back of a product, but it’s been a minute since I last saw it anywhere near a product package.

It could have been chestnuts, or soy sauce, or even Worcestershire sauce.

If I had to make an educated guess it was probably Worcestershire sauce since not may recipes use it.

I have been known to serve these at Thanksgiving, Christmas Eve, and even Christmas day while the holiday meal is cooking.

This is not the usual Bacon Wrapped Water Chestnut recipe you find commonplace now.

The dipping sauce has no BBQ sauce, grape jelly, or ketchup.

The sauce only has a few ingredients that you might already have on hand; soy sauce, Worcestershire sauce, butter, mustard, and brown sugar.

You can add some chili sauce or sriracha to the dipping sauce if you want a little more heat.

You could even marinade your water chestnuts in additional soy sauce, but this is going to produce a mighty salty finished product.

If you add chicken liver and green onions, you can make rumaki with a different spin on the traditional teriyaki sauce.

Add jalapeno slices if you want to add heat to the actual Bacon Wrapped Water Chestnut rather than just adding heat to the sauce.

Really, you could even wrap a pineapple piece or a date rather than a water chestnuts, this bacon wrapped water chestnut sauce is pretty versatile and goes with just about anything you would want to wrap in bacon. 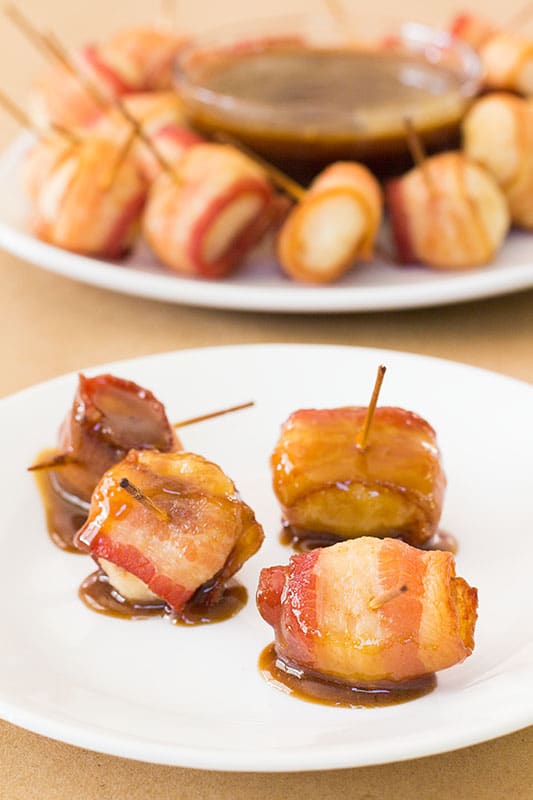 Thick sliced bacon can be used, it just takes much longer to cook in the oven, and adds to the cost of making.

Ready-to-eat bacon from the store can also be used here since it is still pliable.

Using pre-cooked bacon will reduce your baking time but also increase the cost associated with this recipe.

Our Bacon Wrapped Water Chestnut recipe can easily be doubled and tripled.

It can even be reduced by half if you are only cooking for a few people.

The only real limit on this one is the size of your baking vessel and the time required to individually wrap the water chestnuts.

A trick for getting the toothpick through the water chestnut is to use the fancier toothpicks that have one blunt end.

It is so much easier when you can push on the end rather than try to slide it in with the middle because of the pointed ends.

Try and get as close to the center of the chestnut as possible, otherwise, they might split.  If this happens, just wrap the bacon tighter and try to skewer it in a manner in which both halves are attached by the toothpick.

Using a foil-lined pan will make clean up easier.

If not, you may find you need to soak your baking pan to get the burnt bacon grease off.

I would probably not cook bacon wrapped water chestnuts in a crockpot or slow cooker.

But, bacon wrapped water chestnuts can be kept warm in a slow cooker.

To do this put the baked water chestnuts into the slow cooker and set the heat to warm.

You can pour the sauce over the top, I just find this makes for sticky toothpicks and fingers.

Instead, try pouring the sauce into the bottom of a slow cooker before placing the cooked bacon wrapped water chestnuts in the slow cooker, toothpicks all facing up.

I cook my bacon wrapped water chestnuts in the oven, but someone with more patience than I could grill them over medium-low heat or even smoke them.

I would not freeze Bacon Wrapped Water Chestnuts before or after cooking.  The texture will not be the same.

You can assemble these ahead of time though and store in the refrigerator for a few days in a sealed container.

I just wouldn’t do this too many days in advance as your bacon will start to lose its color and its freshness, the same as an open package of bacon would. 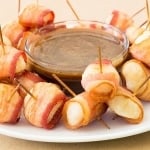